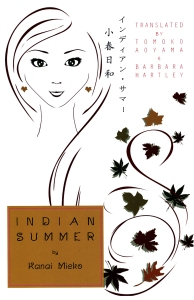 Nineteen-year-old Momoko has managed to pass the entrance exam of a university in Tokyo, and her mother has decided that she will stay with her aunt, a middle-aged novelist who lives in the Meijiro neighborhood of West Tokyo. Momoko’s aunt is a free spirit with a difficult personality, but that’s just fine with Momoko, who is more than a little quirky herself. Momoko occasionally goes to class or goes out drinking, and her aunt occasionally gets her act together and publishes something, but mostly they hang around the house together being useless.

Kanai Mieko is known for her surreal and often disturbing fiction, but there are no dark or upsetting themes in Indian Summer. In their introduction to the novel, translators Tomoko Aoyama and Barbara Hartley describe it as “girls’ literature,” meaning “not simply the new or older ‘chick lit’ or the juvenile fiction and romance targeted at female audiences but more widely any literature that has attracted the sustained interest of (and has often been produced by) ‘girls’ (young women and their sympathizers).”

Indian Summer was published in 1988, the same year as Yoshimoto Banana’s famous girls’ literature novella Kitchen, and both stories reflect the heady energy of the consumer culture at the end of the bubble years. Unlike Kitchen, however, Indian Summer has more of a satirical bite, with Momoko expressing a lazy disdain for the sort of concerns celebrated by women’s magazines, such as clothing and romance. One target of Momoko’s annoyance is her divorced father, who lives in Tokyo and works as a hotel manager. He makes a series of clueless attempts to bond with his daughter by taking her out to nice stores and fancy restaurants and offering fashion advice, but Momoko is not impressed. Her main concern is avoiding the girlfriend for whom her father left her mother, but this “girlfriend” turns out to be a beautiful young man. To Momoko’s complete lack of surprise, gay romance turns out to be just as tawdry and boring as straight romance, for which she has zero patience.

Momoko lets off steam with her college friend Hanako, whose father is also an embarrassment, especially in his insistence that his precious daughter is too good for things like a part-time job. Neither of the girls particularly cares what any men think of them, however, and in their lack of concern they are passively supported by Momoko’s aunt, who just wants to drink and write. These three women drift through their days together, not marching to the beat of any drum at all as they enjoy each other’s company. Sometimes they talk about their lives, and sometimes they talk about books and movies, but mostly they just chill out. Because of the charm and wit of Kanai’s writing, this is a lot more interesting than it sounds, but there’s no denying that Indian Summer is a light and refreshing novel that isn’t meant to challenge its reader.

Interspersed between the chapters of the novel are Momoko’s aunt’s essays on everything ranging from motherhood to abortion to Roland Barthes to the foibles of bourgeois women. These short interludes are inspired by the aunt’s day-to-day life with her niece and provide a sort of parallax view on the events of the story. While Momoko tends toward a negative assessment of the world around her, her aunt’s opinions are more tongue-in-cheek, but the two women are still very much alike in their casual nonchalance.

Because of its inclusion of these “non-fiction” essays, and because of its lack of a clearly definable plot, Indian Summer is a strange little book that’s difficult to categorize. That being said, Kanai’s writing is a lot of fun and genuinely humorous. I would recommend this short novel to people who enjoy the breezy sort of fiction characteristic of 1980s Japan but who would appreciate something a bit more grounded and intelligent than the romance and science fiction from that decade that had previously appeared in translation.

Leave a Reply to Do Comics Belong in the College Classroom? Cancel reply