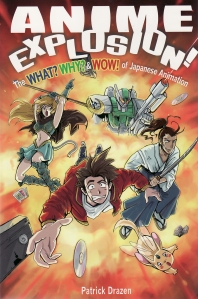 When I got Anime Explosion! in the mail from Amazon, I was so excited. I had seen it on a friend’s bookshelf, and, silly cover illustration aside, it seemed like a fairly serious reference source on anime. Instead of merely listing one anime series after another, its chapters are structured around broad themes (portrayals of nature, anti-war messages, etc.), with chapters devoted to single works or directors at the end of the book. The chapters are filled with well-selected and well-formatted illustrations accompanied by captions that do not merely repeat what is in the text, and there are numerous footnotes, which are also well-formatted and easy to read. The bibliography at the end of the book references such serious scholarly works as Professor William LaFleur’s Liquid Life: Abortion and Buddhism in Japan as well as numerous creator interviews from the pages of the long defunct but still fondly remembered anime magazine Animerica. The book hits all the big bases, like Japanese folklore in anime, nudity in anime, the Pokémon phenomenon, Studio Ghibli, and even one of my personal favorite series, Revolutionary Girl Utena. What’s not to like?

The fact that Anime Explosion! is one of the more boring books I’ve ever read is not to like, actually. And you’ll have to believe me when I say that, during my six years in higher education, I have read some pretty boring books. During my two years in higher higher education, I have also read some pretty terrible student papers, and so I think I can put my finger on what I dislike about Anime Explosion! – it’s the plot summary. Pages and pages of it. All written in singularly uncreative and unevocative prose. Judging from the level of the language, I would say that, despite the occasional frank discussions of sex and sexuality, the target audience for this book is currently enrolled in middle school. The book also assumes that the reader knows nothing about Japan, which I suppose is fair; but, to those of us who have studied the country, the cultural clichés referenced over and over again come off as a little stale. There also isn’t much interpretation involved, and the little that does exist is tepid and sophomoric.

I hesitate to say this, as Drazen acknowledges this problem in both his introduction and his conclusion, but Anime Explosion! is also a bit dated. The individual works covered in the book are, for the most part, classics, and no amount of time is going to change that. In that sense, Drazen has done an excellent job of creating a reference work that will transcend the whims of an extremely capricious field. On the other hand, for having been published in 2003, this book feels like a relic from the mid-nineties. The internet? What is this strange thing? The Japanese bubble economy collapsed? Oh my god! Also, to me, a presumably serious scholar, many of the seventies and eighties era texts Drazen references (like Kitteridge Cherry’s Womansword: What Japanese Words Say About Women) can no longer be taken seriously. Also, for those fans curious about such recent phenomena as moe and hikikomori, there is nothing to be found.

All that being said, this is a solid book and may prove interesting to younger or more hard-core anime fans. And, to be fair, Drazen’s chapter on “Gay and Pseudo-Gay Themes in Anime” (which Drazen aptly titles “A Very Pure Thing”) is bold, insightful, and well ahead of its time. For those of us interested in how anime stereotypes came to be, chapters like “Shojodo: The Way of the Teenage Girl” are also useful. For older readers looking for thrills and entertainment, however, I would recommend an anime magazine like Otaku USA, which tends to function at a much higher level than Drazen’s well-meaning but regrettably prosaic reference work.