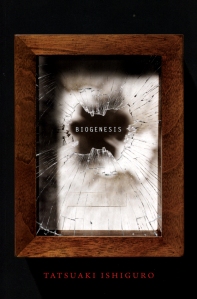 Biogenesis collects four stories by Ishiguro Tatsuaki, who is both a practicing medical doctor and an acclaimed writer of horror-themed science fiction.

The book is dominated by the first story, “It is with the Deepest Sincerity that I Offer Prayers…” which takes the form of a scientific report (tables and endnotes and all) on a species of winged mice that have suddenly disappeared from their habitat in Hokkaido. The report focuses on the activities of Dr. Akedera Nobuhiko, an AIDS researcher employed under somewhat shady circumstances to “preserve the cellular and genetic information” of the vanishing species. Akedera was apparently so fascinated by what he found in the process that he insisted on undertaking ecological research as well, recording accounts of sightings and deaths.

Akedera was able to draw a number of unsettling conclusions from this data. First, the winged mice seem to die in waves. Second, there are unusual patterns regarding their movements and seasonal behavior. Third, many of the people who have documented and captured winged mice attest to a strange glow either emanating from their bodies or otherwise present when and where they gather. Finally, live mice are most often found and photographed by or in the prescence of human children.

Akedera is sent back to Tokyo, but he continues to involve himself with research and preservation efforts, which result in the discovery that cultures of winged mice cells exhibit startling tendencies and may even possibly be immortal. What exactly is going on with this species – and what exactly drove Akedera’s intense interest?

The dry tone of the story’s scientific prose forms a gorgeous ironic contrast to the fantastic nature of what it relates, and the reader is encouraged to employ her own analytical acumen to excavate a number of details from between the lines. The typeface used for this story, which lends it the air of an unpublished manuscript, is a nice metadiegetic touch.

The second story in the collection, “Snow Woman,” begins with a clinical description of hypothermia. The narrative quickly moves to a discussion of a medical condition called “idiopathic hypothermia,” in which an individual’s stable body temperature is about 15°F lower than normal, which suggests “the possibility of an extended lifespan due to lower metabolism.” This information serves as an introduction to a scholarly account of the discovery of the condition and the mysterious death of the army doctor who published the first paper about it in the 1920s. This doctor, Koho Yuhki (which is the name he published under in German), had been stationed at a mountain clinic in Hokkaido, where he had been instructed to investigate cures for frostbite.

At a certain point during his studies, Yuhki was presented with a woman who had entered a coma after falling asleep in her woodshed in subzero conditions. Although she regained consciousness, her body temperature never rose above 86°F, and any attempts to return it to normal were met by a dangerous drop in her blood pressure. The scientific community considered Yuhki’s published findings a hoax; but, in 1997, a number of army documents were declassified, revealing that his case study was even stranger than it seemed.

“Snow Woman” is written almost exactly like a scholarly essay, so much so that Ishiguro almost managed to convince me that “idiopathic hypothermia” is real. Seriously, I had to google it.

The science fiction subgenre of providing rational explanations for seemingly supernatural phenomena is not new, but Ishiguro handles the “science” elements more deftly than any other writer I’ve encountered. The metadiegetic elements he incorporates into each story imbue the experience of reading them with an extra touch of thrill and wonder, as if you yourself have stumbled onto a rare and bizarre scientific breakthrough, perhaps by having slipped ever so slightly into a parallel universe in which such things were truly possible.

The third and fourth stories in Biogenesis are equally intriguing, but I’ll leave you the pleasure of discovering them for yourself. Ishiguro’s fiction is as much about the art of science as it is about the pleasures and potential of the unexplainable, and I’m keeping my fingers crossed that more of his work finds its way into English soon.

One thought on “Biogenesis”