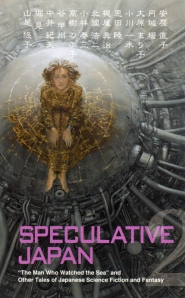 Speculative Japanese 2 (subtitled “‘The Man Who Watched the Sea’ and Other Tales of Science Fiction and Fantasy”) is a collection of thirteen stories ranging in length from four to forty-eight pages. Half of the stories are from the late seventies and eighties, and the other half are from the past decade, with the most recent being published in 2007. These stories, which were selected for translation based on a Japanese SF magazine reader survey and the editor’s own taste, range from fantasy to magical realism to hardcore science fiction. In fact, the stories are so varied in genre that “speculative fiction” does indeed seem to the only label capable of describing them.

Speculative Japan 2 is an excellent anthology without even a single dull story. The premise or idea behind each story in the book is uniquely fantastic. In Enjoe Toh’s “Freud,” a family gathers at the house of the narrator’s recently deceased grandmother only to find twenty clones of Sigmund Freud hidden under the tatami mats and beneath the floorboards. In Issui Ogawa’s “Old Vohl’s Planet,” the inorganic life forms inhabiting a planet with an extremely volatile atmosphere are threatened with annihilation and must rely on the vast reserves of their hereditary memory to send a distress signal to the stars. Kajio Shinji’s “Emanon: A Reminiscence” tells of a man’s brief encounters with separate incarnations of a woman who is able to remember all of her former lives. Kobayashi Yasumi’s “The Man Who Watched the Sea” describes a world in which time flows differently at different altitudes from the perspective of two time-crossed lovers. Nakai Norio’s “Mountaintop Symphony” chronicles the tribulations and victories of an orchestra tasked with the performance of a piece of music that spans dozens of years and requires instruments that haven’t been invented yet.

The longest story in the collection, Tani Kōshū’s “Q-Cruiser Basilisk,” is told from the perspective of a petty officer on a spacecraft with a five-man crew. In the dead of space, the narrator’s ship encounters a much larger craft that seems to be a remnant of a war that ended two hundred years ago. The vessel is, as the narrator puts it, a “ghost ship,” and, despite his trepidation, the narrator finds himself recalling classic adventure tales by the likes of C.S. Forester and Robert Louis Stevenson. Despite the narrative static generated by detailed descriptions of naval battle maneuvers executed in space, the story is genuinely creepy as the narrator and his fellow crew members board the empty ship. As the narrator reads the captain’s log, the reader is drawn into an even stranger tale of uncertain fates and eerie distortions in space. Along with its echoes of the adventure tales alluded to by the narrator, “Q-Cruiser Basilisk” resonates with the plots and themes of postwar American space fiction, as well as with classic existential speculative fiction such as Nelson S. Bond’s “And Lo! The Bird.” The story is satisfyingly old school but fresh enough to feel like a plot from a contemporary animated short film.

My two favorite stories in the collection were more fantasy flavored. In Ōhara Mariko’s “The Whale that Sang on the Milky Way Network,” a young man on a backwater agricultural planet waits eagerly for a circus that visits a certain seaside town once every four years. When the circus finally comes again, the young man befriends one of its performers, a whale who can supposedly fly through space. He confesses his love for a local politician’s pop star daughter to his new friend, and he and the whale hatch a plan to leave the planet and become famous together, which succeeds spectacularly. Takagi Nobuko’s “Melk’s Golden Acres” at first seems like a normal work of realist fiction, as it opens with a Japanese traveler’s impressions of the Austrian countryside and the abbey above the town of Melk. The narrator recounts the history and treasures of the abbey, especially those of its library. After touring the library himself, the narrator is addressed by an old man who had been gazing at one of the room’s stained glass windows. The old man claims that his wife is in the window, and the narrator, intrigued, follows him to a nearby restaurant where he learns more about the old man’s life. The story then takes a slow turn towards the surreal before closing in an entirely unexpected fashion. Whereas I enjoyed “The Whale that Sang on the Milky Way Network” because of its whimsy and sense of adventure, I loved “Melk’s Golden Acres” for its grounded yet beautifully descriptive language and the way it toes the line between realism and fantasy, leaving a multitude of possibilities open to the reader.

Each of the stories in Speculative Japan 2 is worth reading, and each writer represented in the collection has a unique and engaging style of storytelling. The quality of the translation is uniformly excellent, and the goofiness and genre allusions and creative language of each respective writer comes through in sharp focus. The efforts of the editor have ensured that the overall readability of the translations maintains a high standard, so even the more interesting linguistic experiments of the original authors are conveyed in solid English that is fully aware of the idioms of Anglophone speculative fiction. As a result, a reader of Speculative Japan 2 can effortlessly jump from one world into another, and the experience is thoroughly enjoyable.

Speculative Japan 3 is slated for publication at the end of the year, and I’m already looking forward to it!