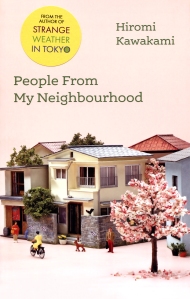 The unnamed first-person narrator of People From My Neighborhood lives in a town that was rural when they were a child but has since developed and gentrified as farmers sold their land. Young people now commute to Tokyo, but a number of interesting people – and creatures – remain in the area. Some of the stories in this collection of microfiction are about the supernatural, but many are about people who are just a little odd or different.

There’s the taxi driver, for example, who spends all night driving around the ghosts of three women who supposedly died in the old tenement housing he refuses to vacate. There’s the self-appointed principle of a dog training program who spends all day loafing around the local park and sharing gossip. A child named Hachirō rotates between families in three-month intervals determined by lottery, as his parents already have fourteen kids. An elderly man who lives in a dilapidated mansion on the outskirts of town is called “Grandpa Shadows” by the local children because he has two shadows, one of which is rowdier than the other.

Then there is the mysterious diplomat who comes to town and provokes panic by going fishing in a lake that doesn’t exist. A princess keeps a beautiful garden and may or may not be responsible for a handful of murders and mass poisonings. One day a temporary mountain of sand appears along with a temporary god, and one day gravity simply disappears for a few hours.

My favorite story is “The White Dove,” in which a high school student picks up a peculiar avian creature during a fieldtrip. She takes the creature home, and it undergoes several metamorphoses before transforming into a sweet-tempered middle-aged man. He has a great destiny to fulfill, but this is largely irrelevant to the girl, who has a healthy sex drive and can think of far better uses for the man-shaped creature who now lives in her house. Although I’m always a fan of monster romance, what I love about this story is the way it sidelines the spectacular in order to focus on the drama of the mundane.

Some characters appear in more than one story, such as the narrator’s friend Kanae, who has a strong personality and goes on to live a storied life. Kanae’s sister, whose dream is to become a psychic medium, also finds herself at the center of several strange occurrences, as do a number of the narrator’s friends and acquaintances. The progression of stories jumps backwards and forwards through time, but the reader is nevertheless able to develop a sense of the social landscape of the small town and its population.

Since each story is only about two to six pages long, it’s fun to dip into the collection a bit at a time to see what’s new in town. By the end of the book, you almost feel as though you live there yourself. If you’re in the mood for a vacation to a place where anything could happen, People From My Neighborhood is your ticket to a bizarre yet relaxing experience.

One thought on “People From My Neighborhood”