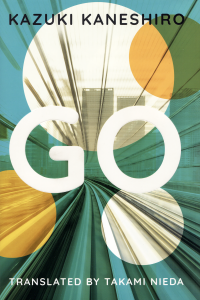 GO is an unabashedly sincere adolescent power fantasy. The novel’s teenage protagonist and first-person narrator, Sugihara, is not only intelligent and an intellectual, he’s also a powerhouse in a fight and respected by the other boys in his school. He reads weighty philosophical books and has an astounding knowledge of music and movies. A beautiful and popular girl named Sakurai is head-over-heels in love with him and has been since she first saw him. His father, an independent businessman and grizzled former boxer, treats him as an equal, and his mother and her friends adore him. Sugihara isn’t gay, but all of his close male friends still ask him out on dates and would do anything for him. There’s just something special about Sugihara, who is the perfect idealization of the teenage boy we’d like to think that we were or could have been.

The plot of GO is exceedingly simple. Sugihara switches schools between middle and high school, struggles to fit in to the new school’s culture, meets a beautiful girl and falls in love, starts studying to get into a good university, encounters a problem in his romantic relationship that leads to tension in his family life, overcomes his conflict with his father in a cathartic argument, and is then approached by his girlfriend with a sincere apology that repairs their relationship.

What makes GO interesting and worth reading, however, is the fact Sugihara is a Zainichi Korean, a person born and raised in Japan by Japanese-speaking parents who is not, legally speaking, Japanese.

Sugihara and his family begin the novel as Chōsenjin, or Zainichi Koreans who hold North Korean citizenship. Although his father was born on Jeju Island in South Korea, he was an active member of the North Korean Marxist Chongryon organization for most of his life and declared his family’s citizenship accordingly. The family officially switches their citizenship to South Korea when Sugihara is fourteen because his mother wants to visit Hawaii. Of course they can’t travel to the United States with North Korean passports, so they join the Mindan, the organization for South Korean residents.

Sugihara’s citizenship changes along with that of his family, but he wants nothing to do with what he calls “their Hawaii adventure.” What he decides to do instead is attend a Japanese high school. Up until that point he had gone to a Korean high school run by the Chongryon, where (male) students are given a strict Marxist education. Sugihara doesn’t care anything for Hawaii, but his citizenship changing overnight sparks a desire to be a part of the wider world. In his mind, this needs to start with attending a mainstream Japanese university. To do so, he needs to enter a Japanese high school, so he studies his butt off and, to the surprise of his classmates and the infuriation of his Chōsenjin teachers, he passes.

When he was younger, Sugihara toughened his fists against the Japanese boys who would chase after Koreans trying to pick fights, and he manages to earn the respect of his classmates at his Japanese high school by beating up a student who tries to pick a fight with him there. This student ends up being a yakuza boss’s son, and his defeat causes him to respect Sugihara as a peer. It’s at one of this young man’s lavish birthday parties that Sugihara meets Sakurai, who had once seen him playing basketball and decided to pursue him. Their relationship proceeds relatively normally, but Sugihara can’t quite bring himself to tell Sakurai and her family that he’s not actually Japanese.

I have to admit that I’m of two minds about this novel.

On one hand, I think Sugihara is obnoxious, and the story he tells about himself is utterly contrived. Every time a conflict arises, Sugihara handles it by being A Super Cool Guy™, which isn’t particularly interesting in terms of plot or character development. I’m also not a fan of Sugihara’s narcissism, which is so overwhelming that it doesn’t leave any room for him to acknowledge that any of the other characters might have an interior life of their own. Sugihara’s relationship with his girlfriend, for example, mainly consists of him lecturing her on his taste in entertainment media. When she expresses an extremely racist viewpoint at a critical moment, there is absolutely no reason for her to have done so save that her entire function is to serve as a plot device in a story that revolves entirely around Sugihara.

On the other hand, the author provides plenty of context for Sugihara’s bravado, citing numerous instances of discrimination that Sugihara and his family have to deal with within Japanese society, a difficult situation that isn’t made any easier by the harsh emphasis on ideological purity within the Chōsenjin community. If everything in Sugihara’s society is telling him that he’s literal garbage, can’t he be forgiven at least a little for indulging in a power fantasy as he narrates his own life?

Interspersed throughout Sugihara’s personal story of how he’s awesome and smart and tough and attractive is the story of his family circumstances. This secondary story begins at the start of the novel…

My father came to Japan with a brother who was two years younger than he was. This brother – my uncle, that is – returned to North Korea during the repatriation campaign that began in the late 1950s. The campaign essentially touted North Korea as an “earthly paradise,” encouraging persecuted North Koreans living in Japan to return to their homeland and forge a life with their compatriots. At the time, most North Koreans had a vague suspicion that nothing good ever came out of anything called a campaign, but thinking it might be better than Japan, where they faced discrimination and poverty, many went back to North Korea anyway. My uncle was among them. (5)

…and reaches something resembling a conclusion when Sugihara gets in a fistfight with his father after his girlfriend dumps him. To me at least, Sugihara’s parents are far more interesting characters than he is, and his relationship with his father is much more compelling than his relationship with Sakurai. Sakurai is a one-note airheaded racist because teenage girls only exist as plot devices, but Sugihara’s father provides a much more nuanced portrayal of the subtle tensions and outright conflict that can arise between national, ethnic, and personal identities.

As someone who belongs to a culture where immigrant literature is an established genre, it was an interesting experience for me to read the story of a second-generation immigrant in a society that is known for its relative ethnic homogeneity. I’ve encountered numerous discussions relating to Zainichi Koreans, but I’ve never read anything quite like GO. Kazuki Kaneshiro, a Zainichi Korean himself, is writing from a firsthand perspective, and his narrator’s deliberate resistance to received narratives about who Zainichi Koreans are and what their place in Japan is supposed to be is extremely powerful.

I suppose that GO can be read as a story of star-crossed lovers, but the relationships with the most emotional impact involve the friendships between high school boys, the frustrated affections between different generations within immigrant families, the misunderstandings between different socioeconomic classes, and the historical tensions between Korea and Japan. If you can get past the casual sexism of the central love story, GO has a lot to offer anyone interested in international literature or, more broadly speaking, coming-of-age stories in general. If nothing else, its narrator’s triumphantly oppositional attitude and cheerfully competitive shōnen manga-style life narrative is a refreshing alternative to more serious literary depictions of the helpless pathos and dysfunctionality of immigrant communities in Japan.