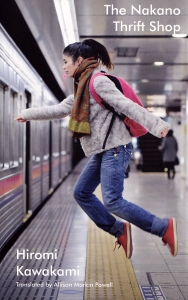 Hitomi works at the Nakano Thrift Shop, which is run by a middle-aged man named, unsurprisingly, Mr. Nakano. While she watches the store and works the till, a young man around her age, Takeo, accompanies Mr. Nakano on buying trips. The trio is occasionally visited by Mr. Nakano’s sister Masayo, an artist of independent means. The twelve loosely connected stories in The Nakano Thrift Shop are about the strange and silly things that happen to this odd group of characters, whose small dramas for the most part seem to exist outside of the specifics of time and place.

Hitomi is short-tempered and cagey, Takeo is passive and uncommunicative, and Masayo is chatty and expansive, but it is the stubborn and befuddled Mr. Nakano whose mishaps and shenanigans serve as the focal point or punchline of each story. In the second story, “Paperweight,” Mr. Nakano bribes Hitomi to go visit Masayo and get gossip about her new lover, which sparks a friendship between the two women. In the third story, “Bus,” Mr. Nakano travels to Hokkaido on a buying trip and becomes involved in a one-sided love affair, amusing Hitomi with the messages he sends back to the shop. In other stories, an unusual customer provides a break from the store’s daily routine. For example, in the ninth story, “Bowl,” a young man tries to get rid of a valuable antique bowl, which he believes has been cursed by an ex-girlfriend. The Nakano Thrift Shop is more of a downmarket store, so Masayo forces Mr. Nakano to pass the bowl over to a specialist ceramics dealer with whom he happens to be in the process of breaking off a romantic relationship.

Over the course of the book, Hitomi enters into a romantic relationship of her own with Takeo. This romance never makes much progress, however, as Hitomi demands action and attention while Takeo doesn’t like talking on the phone and is content simply to allow life to happen to him. Like everything in The Nakano Thrift Shop, their relationship is lowkey and laidback, and it ebbs and flows without any sort of drama.

For the reader, the pleasure of these stories lies in peeking into the lives of these characters as they drift through the changing seasons while comfortable in the stability of their friendships. Even though unusual things occasionally happen, no one is ever strongly affected by these events. For instance, in the first story, “Rectangular #2,” an odd man named Takadokoro comes into the store to sell artistic nude photos. Masayo tells Hitomi that the pictures are of Takadoroko’s former student. Takadokoro has the potential to be a truly creepy (or pathetic) character, but the warm narrative tone of The Nakano Thrift Shop treats him as just another person in the neighborhood. He doesn’t bother anyone, and no one is bothered by him. After all, everyone is a little weird once you get to know them.

In the final story, “Punch Ball,” the Nakano shop has closed, and the characters have all gone their separate ways. Hitomi takes various office jobs as a temp worker while she studies for her bookkeeping certification exam. Her current distance from the carefree atmosphere that suffused the earlier stories puts them into perspective, and her former freedom from the pressures of the corporate world now seems much more meaningful. Now that she spends her days sitting at a desk in front of a computer, social interactions are no longer improvised and unique, and friendships are no longer so easily formed. There’s a playful innocence to Hitomi’s time in the Nakano shop that only becomes apparent in retrospect.

The Nakano Thrift Shop is a short and pleasant book that will appeal to anyone who enjoyed The Briefcase (which was published as Strange Weather in Tokyo in the UK). Although it’s a wide leap removed from the darker themes and imagery of some of Kawakami’s other work that has appeared in translation, it’s mercifully free of the sentimentality and melodrama of Yoshimoto Banana novels. As Hitomi seems to be in her mid to late twenties, it’s up for debate whether The Nakano Thrift Shop can be classified as “girls’ literature” (shōjo shōsetsu), but reading these stories conveys a vicarious sense of what it feels like to be a young woman chilling out and having fun in a trendy Tokyo suburb.

One thought on “The Nakano Thrift Shop”