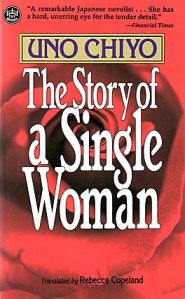 Translator Rebecca Copeland aptly remarks in her introduction to The Story of a Single Woman that this novella “is the Uno Chiyo story, the story she has told countless times before in earlier works.” Indeed, this semi-confessional narrative of love pursued against overwhelming societal resistance runs not just through Uno’s oeuvre but through the work of pre-bubble women writers in general, at least as it is portrayed in anthologies like Noriko Mizuta Lippet and Kyoko Iriye Selden’s Japanese Women Writers: Twentieth Century Short Fiction. What is special about The Story of a Single Woman, however, is how Uno is able to recount her narrative in a dashing and gallant narrative voice with a minimum of self-pity.

The novella’s heroine, Kazue, is born and grows up in a tiny mountain village named Takamori (not to be confused with the city on the island of Kyūshū) in the early twentieth century. Her mother dies when she is still an infant, and her father, a sake brewer of some renown, quickly remarries himself to a young woman. Oddly enough, it is not Kazue’s stepmother who harasses the child, but rather her father, who controls the family with an iron will and forces everyone to behave with perfect decorum, even as his fortunes decline. At the behest of her father, Kazue is married off to one of her cousins while still in her early teens; but, because her young husband is not yet interested in girls, Kazue walks back home and never looks back. When her father dies, she takes a job as a teacher in a larger town. Perhaps her newfound independence goes to her head, because she soon starts visiting a young male teacher at his residence, unchaperoned. The malicious gossip created by this affair forces Kazue to resign her job. She retaliates by moving to the newly colonized state of Korea to launch a career as a journalist.

This is merely the start of Kazue’s amorous adventures. Throughout the novel, she is brave and cheerful and never defeated, even though her many lovers, who also must yield to the social constraints of the time, abandon her one after the other. Scattered throughout the account of Kazue’s attempts to establish herself as a serious author while following her heart from one relationship to the next are vivid and lovely descriptions of life in the Japanese countryside and cities that would be forever shattered by the Pacific War and its legacy.

Overall, The Story of a Single Woman is a quick and enjoyable read. Even though its tone carries the somewhat Victorian literary flavor of the immediate postwar period, it manages to be quite erotic at times. Very occasionally, it’s also laugh-out-loud funny. What I found interesting about this book is that, although the real-life Uno Chiyo is infamous as a femme fatale, her literary avatar Kazue comes across mainly as a brave young woman who cannot help but suffer from her insistence on playing a man’s game in a man’s world. Although this story doesn’t have a happy ending (although I should add that it doesn’t have a sad ending, either), it is remarkably true to life and even a little uplifting in its honesty.