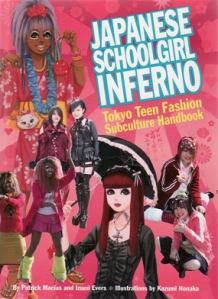 When a friend gave me this garishly pink little book as a present, I saw the name “Patrick Macias” on the cover and immediately prepared to be disappointed. Macias has authored and co-authored numerous books on Japanese popular culture. Two that might be familiar are Cruising the Anime City: An Insider’s Guide to Neo-Tokyo (2004) and TokyoScope: The Japanese Cult Film Companion (2001). These books are not only boring but were also outdated on the day they were published, primarily because Macias’s fascination with Japan’s popular culture during the seventies and early eighties fails to hold the attention of those of us who want to know what’s going on in Japan right now. In fact, I might even go so far as to say that Macias’s earlier books might have been better served if they were marketed as cultural histories instead of as guides to contemporary popular culture.

One thing that I found especially charming about this book were all the suggestions the authors offer as to how to achieve these schoolgirl looks yourself. Far from being helpful, these sections actually serve to pinpoint how outrageous the fashions are. Another fun, recurring segment are the illustrated “A Day in the Life” inserts, which usually end with captions like “Mom says, ‘Take a shower! You two smell awful!’”

So, if you’ve always wanted to know what’s going on inside the heads of the Gothic-Lolita princesses, or if you’ve always been curious about how exactly the Mamba girls put on their makeup, this is the book for you. Even if you’ve never had the leisure to wonder about those things but have spent time in Tokyo, this is also probably the book for you. And if you really, really love pink, then I honestly can’t recommend this book enough. Go out and get it before it goes out of print. For the win. I’m serious.