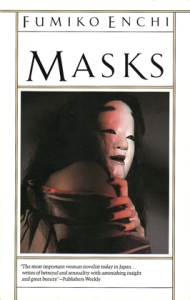 Juliet Winters Carpenter, the translator of Enchi Fumiko’s novel Masks, is one of the most eloquent translators of Japanese literature alive today. Carpenter has translated everything from Tawara Machi’s groundbreaking collection of tanka poetry, Salad Anniversary (Sarada kinenbi, 1987) to Asa Nonami’s hard-boiled police thriller The Hunter (Kohoeru kiba, 1996). My advice to all lovers of Japanese literature would be: if Juliet Winters Carpenter has translated it, you need to read it!

Enchi Fumiko is one of the most highly regarded writers of literary fiction in Japan. Her father was a scholar of classical Japanese literature, and Enchi grew up devouring the books in his library, from the medieval Tales of Moonlight and Rain to the stories of Edgar Allen Poe. Her pen name, Fumiko, means “child of letters” or “child of literature.” When she grew up, she undertook the translation of the monumental eleventh-century novel The Tale of Genji. She is famous for incorporating allusions to classical literature into her own fiction, which was highly praised by writers like Tanizaki Jun’ichirō and Mishima Yukio.

Enchi’s work is known for its tightly woven plots, subtle writing, strong visual imagery, and masterful use of symbolism. An Enchi novel is like a structuralist literary critic’s dream come true. There is an incredible amount of information packed within each paragraph, and her novels and stories have inspired a wealth of interpretations. Enchi is an intellectual of the highest magnitude yet also possesses the ability to imbue her fiction with great emotional weight.

Although Enchi is primarily known in Japan for her novel The Waiting Years (Onnazaka, 1939), for which she won the prestigious Noma Literary Prize, Masks has its own spooky charms. Although the work’s title refers to the masks of Noh drama, particularly the “madwoman” masks that lend their names to the chapter titles, the novel draws many of its themes and allusions from the Tale of Genji. The parallels Enchi draws between The Tale of Genji and the cultural climate of postwar Japan are fascinating. Not only does the author create distinct connections between her characters and the characters of the Heian romance, but she also makes use of themes such as spirit possession and romantic substitution to subvert the gendered expectations of the patriarchal and misogynistic societies that hold sway in both The Tale of Genji and postwar Japan.

Although Masks is primarily narrated from the point of view of a male college professor named Ibuki, who is cast in the role of Genji, its true hero is an older woman named Mieko, a powerful Rokujō-like figure with a painful past and veiled intentions. As Mieko’s daughter-in-law and protégée, Yasuko, explains to Ibuki,

Believe me, she is a woman of far greater complexity than you – or anyone – realize. The secrets inside her mind are like flowers in a garden at nighttime, filling the darkness with perfume. Oh, she has extraordinary charm. Next to that secret charm of hers, her talent as a poet is really only a sort of costume.

Masks centers around Mieko’s attempt to use this “secret charm” of hers in order to set into motion a deep and complex scheme of revenge, creation, and rebirth. What Mieko is able to accomplish by the end of the novel is both terrible and beautiful. If nothing else, the events that occur during the final dramatic quickening of the work are thought-provoking and will force the reader to consider multiple ethical questions.

Masks is perhaps one of the best introductions to Japanese literature, and more specifically Japanese women’s literature, ever published in translation. No matter where your literary interests lie, this is a novel you need to experience.