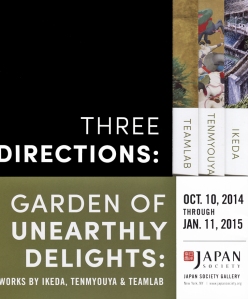 Three Directions was published on the occasion of an exhibition of the work of Tenmyouya Hisashi and Ikeda Manabu at the Chazen Museum in Madison and the Garden of Unearthly Delights exhibition at the Japan Society Gallery in New York, which lasts until January 11, 2015.

The “three directions” of the book’s title refer to the artists’ interpretations of early modern and modern Japanese art, specifically the Nihonga “Japanese-style painting” of the Meiji period (1868-1912). In her short essay on the works of the artists featured in Three Directions, curator Laura J. Mueller provides insight into the influences they have received from medieval and Edo-period (1600-1868) Japanese paintings, prints, sculpture, and garden design. Mueller also explains how the themes of the older art, such as the theme of anxiety surrounding the relationship between humankind and the natural world, have been translated into the work of the contemporary artists. In the main body of the book, which is comprised of extended interviews, the artists discuss their own perceptions of their influences, which are far more temporally immediate.

teamLab, whose work must be seen to be believed (check out the video above), is represented in Three Directions by its founder Inoko Toshiyuki, who talks about the power of participatory media in the twenty-first century. Although he references manga such as Dragon Ball and One Piece and the masume ga (mosaics) of the eighteenth-century painter Itō Jakuchū, his most interesting description of the philosophy behind teamLab’s video installation Life Survives by the Power of Life (Seimei wa seimei no chikara de ikite iru) is that Chinese characters function like summon spells from the Final Fantasy series of role-playing video games. Inoko’s emphasis on a range of interlocking influences is deliberate, as teamLab’s work is designed to illustrate the blurring of the boundaries that supposedly separate contemporary media as they collectively exist both as entertainment and as cognitive enhancements.

Tenmyouya Hisashi expresses a markedly different attitude concerning his relationship to contemporary and premodern artistic media. According to Tenmyouya, his “Neo Nihonga” reflect “the subculture of the ‘street samurai,'” which “represents a counter to the traditional values of wabi sabi, zen, and otaku,” aesthetics that are “far from the reality of contemporary Japan.” Instead, he sees himself as tapping into the energy that originally drove the artistic movements of the Sengoku period (1467-1600), an era of intermittent civil war. Tenmyouya envisions his work as being representative of an aesthetic he terms BASARA – the Sanskrit word for “diamond,” which seems to mean “rebellious” in the context of his art and ideology. As one of his primary influences, he cites the yakuza films of Kitano Takashi, especially the violence, chaos, and dynamism they portray.

Ikeda Manabu is less concerned with aesthetics than he is with process. Stating simply that the most dominant theme in his work is “the conflict and coexistence between man and nature,” Ikeda speaks of being influenced by news reports and the ephemera he encounters in his daily life. The rest is a matter of design, focus, and patience, with the result being that many of his ink paintings function almost like diaries.

Ikeda is currently in residence at the Chazen Museum – you can read his residency blog here – where he is putting together a large and richly detailed masterwork. Three Directions includes an eight-page section on Ikeda’s tools, methods, and progress, which are fascinating even from the perspective of a non-artist.

These interviews with the artists, combined with Laura Mueller’s short contextual essay and the many high-quality images on display, make Three Directions an incredible resource for anyone interested in contemporary Japanese art, aesthetics, and culture. A commonality between the artists is the 3.11 “triple disaster,” which each references and responds to either obliquely or quite directly, so the interviews in particular will be of interest to students and scholars curious about how recent events have impacted mainstream art in Japan. I can also imagine the catalog becoming a useful classroom text, as it’s full of discussion points and allusions to both Eastern and Western art history.

Unfortunately, the book is almost impossible to acquire without either physically visiting the Chazen Museum or Japan Society Gallery or writing to one of their curators, as it’s not available through the online shops of either institution or through other online retailers. If you’re on the East Coast and can make it out to the Japan Society, I highly recommend checking out both the Three Directions catalog and the exhibition itself, which is running until January 11, 2015. 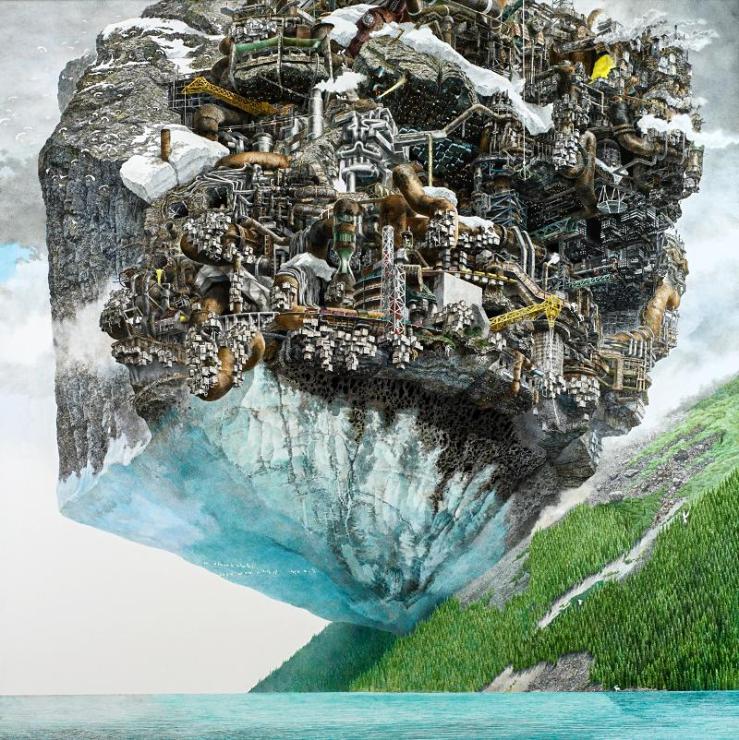