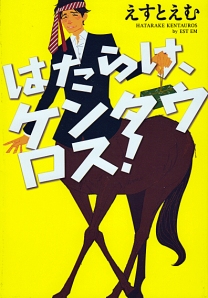 Hatarake Kentauros is a one-shot manga by the BL author est em that contains eight stories and a kaki-oroshi (a short afterward section created especially for the tankōbon publication). The subjects of these stories are centaurs trying to make a living in contemporary Japan. The first four stories are about a salaryman centaur named Kentarō, the challenges he faces at work and while commuting, and his relationship with his human co-worker. The fifth story is about a centaur who wants to apprentice at a soba shop but can’t fit into the kitchen and is assigned delivery work instead. The sixth story is about a centaur craftsman who makes shoes even though he can never wear them, and the seventh story is about a centaur model who becomes depressed because his lower half is always replaced with human legs in Photoshop. The eighth story is about a young centaur graduate who is nervous about moving to Tokyo and beginning work at his first job.

The world created by est em in Hatarake Kentauros is largely homosocial; and, although nothing is ever expressly stated, the reader is encouraged to think of the male protagonists of the stories as gay. The salaryman Kentarō misses a day of work due to a cold and is visited by his male coworker, who prepares noodles while making observations on Kentarō’s kitchen, which was built to accommodate a centaur. The apprentice soba chef ends up bonding with an attractive apprentice ramen chef, and the two decide to open a portable street stall together. The centaur shoemaker rescues the son of his employer from an arranged marriage, and the two grow old together while operating their own business in a different city. The bonds between these male characters are gentle and subtle but no less powerful for not including overtly romantic or sexual elements.

What I like about the stories in Hatarake Kentauros is that they avoid a facile allegorical application of social justice by disallowing a one-on-one correspondence between “centaur” and “gay.” Although they’re just as “human” as anyone else, the centaurs created by est em are most definitely “other.” They’re too large to fit into crowded elevators. There are special lanes for them on the streets because they can’t ride in cars. They need to eat large quantities of food, and they have separate toilets. Centaurs aren’t just different from humans in terms of the shapes and sizes of their bodies; they also live for hundreds of years and take almost fifty years to mature into adults. It is therefore difficult to map categories of real-world otherness, such as gender, race, ethnicity, and nationality, onto est em’s centaurs. The reader is thus able to understand the characters in Hatarake Kentauros not just as platonic symbols but also as individuals.

At its core, Hatarake Kentauros is about the stories of individuals. It’s not about social justice or about men in love with other men. est em’s Equus (released at the same time as Hatarake Kentauros), on the other hand, is much more raw. In my opinion, it’s also more artistic. Some of the book’s stories have almost no dialog, and the impressionistic yet forceful lines with which the centaurs of Equus are drawn emphasize their muscularity and masculinity. These centaurs are sexy – especially when they’re having sex with each other. The stories of Equus do not limit themselves to contemporary Japan but look back to other times and places in which centaurs lived freely in the wilderness apart from human habitation or were inherited from father to son like slaves. Equus makes a clear connection between otherness, sexiness, sexualization, and discrimination, and it’s not afraid to hit the reader where it hurts.

I could write much more about Equus and Hatarake Kentauros, but, to make a long story short, these two manga are brilliant, genius-level works. If you can read Japanese – and even if you can’t read Japanese – it’s absolutely worth the ridiculous shipping rates of Amazon.co.jp to import these two books from Japan.

ETA: Hatarake Kentauros will also be available via JManga starting on Thursday, April 19. 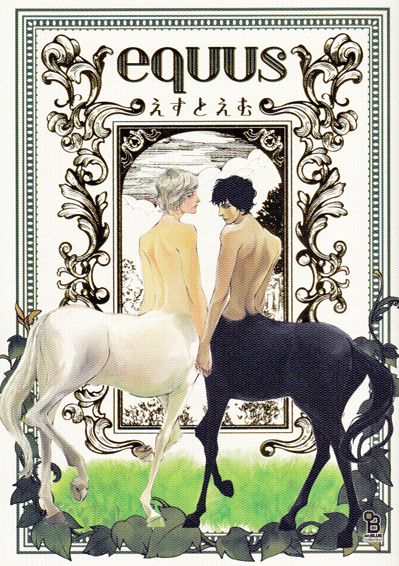