This guest review is written by Jeremy Anderson (@GameNightJeremy on Twitter).

Log Horizon: The Beginning of Another World is a light novel about people who become trapped in a fantasy video game world and must figure out what to make of themselves in this new environment as they navigate its dangers.

The plot is as follows: A young, intelligent, and socially awkward man named Shiroe finds himself physically inside a world roughly identical in form to the world of an online game he’s been playing for years, and he doesn’t know how to escape. He locates his friends, rambunctious but solid Naotsugu and quiet but reliable Akatsuki, and together they begin to explore the reality in which they’ve become trapped.

Log Horizon distinguishes itself from other entries in the “video game world” trope by changing the stakes. Other such stories, such as the light novel series Sword Art Online, tend to include comatose people who need to be woken up, a situation often nested with some hidden or overt moral about the importance of rejoining the real world. While Log Horizon‘s protagonist Shiroe ponders the possibility that everyone is comatose, he dismisses it as unlikely and doesn’t consider actively seeking an exit to be a productive use of time. Instead, the story is about taking life on its own terms and living life right now, where you are.

Log Horizon starts a little slow but builds on what it’s laid down early on to do more interesting things as it rolls along. I can tell you why I found it to start a little slow: I’m a gamer, and I’m already familiar with gaming terminology. Log Horizon devotes its first chapter to bringing readers up to date on this terminology. If you know what a guild is, how chat and friending functions work, what XP and HP mean, what a level cap is, what an MMORPG is, and so on and so forth, you may find yourself rolling your eyes and saying, “Yeah I get it.”

To me, this slow start is forgivable for two reasons. First, because I understand that not everyone is a gamer, and it’s better that I spend two seconds rolling my eyes than that another reader give up on the story because the writer never explained important terms. Second, because even within the first chapter the revelations about the way this MMO reality and the human-world reality interact are fascinating. That clash of worlds – the logical-but-unintuitive way new rules form from the known systems – is one of the main attractions of setting the story in a video game world. Log Horizon provides a number of clever details regarding world-building, and the protagonist spends a lot of time thinking about those details and responding to them.

In essence, the “video game world” trope provides an excuse to follow a set of strictures that will be easy for some to understand intuitively, and that will be easy to explain to the rest. The other value of setting the story in a video game world (instead of, say, Narnia) is that it allows our hero Shiroe to start off as intimately familiar with how the new world works. After all, he’s been playing the game for years, and he can approach the situation of becoming trapped within it with the calm and rational mind that distinguishes him as a player.

Whereas Sword Art Online explains the mystery behind how its characters have entered the game world almost immediately, Log Horizon doesn’t explain how this happened, might never explain how this happened, and tells the story in a way that makes this lack of information surprisingly acceptable. The story is about what the characters make of their situation, not how they got there.

The conflict in Log Horizon is a struggle for the soul – both the individual souls of the adventurers (Shiroe in particular), and the soul of the community. One of the most illuminating moments in the story is when Shiroe notes that the true threat to players in the game world is social. Thirty thousand people have been uprooted from their lives and transplanted into a new world, which does not have any government or laws. By the end of the novel, the reader sees how ugly this scenario becomes, with a major in-game city resembling a town run by a villain in a spaghetti western. In addition, Shiroe expresses concerns about sexism, such as the legitimate worry that female players, who form a distinct minority, will be harassed more than male players.

As fun as the fight scenes can be in Log Horizon, the novel’s most impressive moments aren’t when a dude is being cut in half or a building explodes; they’re when a man decides to stand up for someone he’s never met, because he knows he and his friends are best suited to get the job done. When his friends, new and old, push him to live more fully. When three people realize they’re the first ever to see the sunrise from a certain previously-unexplored hill. The fundamental question in Log Horizon is not, “How do we escape this false reality so we can get back to living our lives?” It’s a much simpler, broader, and deeper, “How do we live well?”

Log Horizon‘s story isn’t revolutionary in its interpretations of the “video game world” trope or the broader “team fantasy adventure” genre, but it does tell a story that is unique enough to keep the reader interested from cover to cover as it continues to chip away at the limitless edge of narrative possibility.

The story is also available in manga and anime formats.

Jeremy Anderson is a writer and game designer best known for the Shadowrift card game, and a consumer of far more comics and anime than anyone should have access to. He is currently on the design staff of Rise of the Eagle Princess, a JRPG set in a fantasy world based on the Mongolian empire. 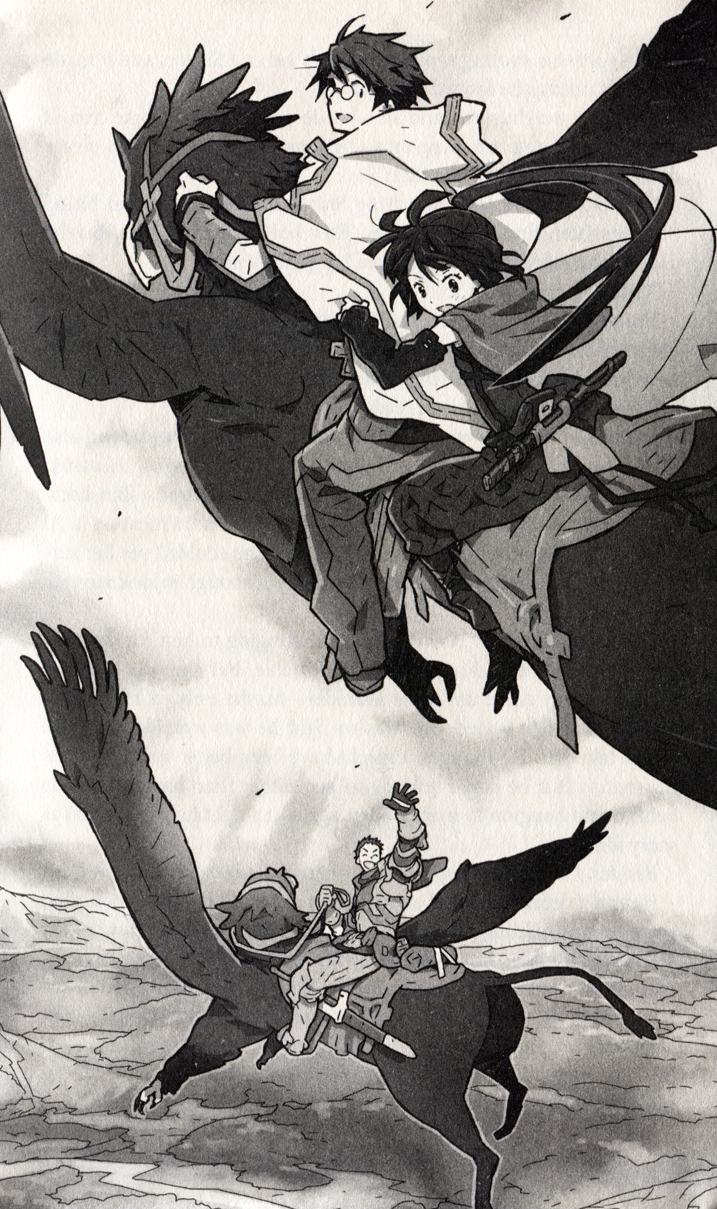