A high school junior named Rintaro Natsuki has inherited a bookstore from his recently deceased grandfather. During the week following the funeral, Rintaro is visited by a talking cat who spirits him away to a series of four magical book-themed “labyrinths.”

The Cat Who Saved Books is a celebration of reading in which a teenage booklover matches wits with the embodiments of academic pigheadedness and corporate greed. The warm coziness of Rintaro’s small bookstore is a welcome haven from the opulent sprawl of the Amazonian book labyrinths. At the center of each labyrinth is an adult in a position of power who misuses his authority to mistreat books. Accompanied his crush, Sayo Yuzuki, Rintaro is tasked with reminding these jaded adults of the true joy of reading. The boss of the second labyrinth, for instance, is a professor obsessed with dissecting books in order to create tidy summaries that will facilitate speed reading, but he realizes the error of his ways when Rintaro and Sayo present him with the passionate argument that reading is about the journey, not the destination.

The Cat Who Saved Books is unabashedly sentimental, and Rintaro and Sayo’s earnest sincerity can feel embarrassingly naive at times. That being said, the story’s satire is surprisingly sharp. The Cat Who Saved Books reminds me of Haruki Murakami’s 1Q84 in the strength of its indictment of the contemporary Japanese publishing industry. I was especially impressed by the third labyrinth, which acts as a bitter critique of giant corporations that put out a steady stream of publications simply for the purpose of pursuing profit. Natsukawa’s comments on easily digestible self-help guides written in the form of bullet points (“Five Ways to Change Your Life!”) are amusing, as is the fantastic image of endless reams of paper tossed from the windows of an impossibly tall skyscraper.

Each labyrinth’s theme is underscored by a set of books. The books referenced are (with the sole exception of Osamu Dazai’s short story “Run, Melos!”) classics of European literature. Examples include Antoine de Saint-Exupéry’s Vol de Nuit, Friedrich Nietzsche’s Also sprach Zarathustra, and John Steinbeck’s The Grapes of Wrath. These books line the shelves of the store managed by Rintaro’s grandfather, who stepped away from an important position in academia in order to free literature from the clutches of scholars and help make them more accessible to ordinary people. Although it’s odd not to see any Japanese fiction mentioned, these weighty European classics conjure an image of the sort of old-fashioned bookstores that used to be common in big cities but are quickly disappearing.

Likewise, it’s easy for me to be frustrated with the naive idealism of The Cat Who Saved Books, but I can imagine that this title will be prominently displayed in the windows of the indie bookstores that are still fighting the good fight. Perhaps it might even help booksellers guide interested readers to more stories outside the sphere of “literary classics.”

Thankfully, HarperCollins has put an enormous amount of love and care into the publication of the hardcover edition of The Cat Who Saved Books. This book is a beautiful physical object. I’m a big fan of the gorgeous cover drawn by Yuko Shimizu, who was given space to write an interesting note that offers insight into her creative process. There’s also a wonderful afterword by Louise Heal Kawai, who explains a number of translation choices, including her decision not to assign gendered pronouns to the talking cat.

As a middle-grade novel, The Cat Who Saved Books is perfect for younger readers just beginning their journey with books. The fantastic elements of the story will appeal to fans of anime and video games, and older readers who enjoy light novels and visual novels will appreciate the colorful, over-the-top characters and comfortably formulaic story structure. The Cat Who Saved Books is an entertaining story filled with warmth, kindness, and bright-eyed hope for the future of books as a means of encouraging empathy and inspiring imagination, and it speaks both to the kids delighted by its adventure and to the adults amused by its satire.

I’d like to extend my gratitude to HarperCollins for providing an advance review copy of The Cat Who Saved Books. The North American hardcover edition will be released on December 7, 2021. You can learn more about the book on its website (here) and order a copy from your local small bookstore, which you can find through IndieBound. 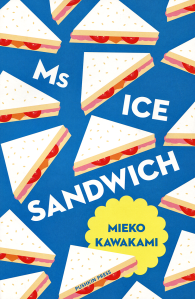 Ms Ice Sandwich is a novella that gradually opens a door into the interior world of its protagonist, a boy living with his mother and grandmother in a commuter suburb. This boy is fascinated by a woman who sells sandwiches at the grocery store outside the train station, whom he calls “Ms Ice Sandwich” because of the ice-blue eyeshadow she always wears. Her makeup emphasizes her eyes, which she has had surgically altered to appear larger. The narrator, who is a strange little kid, becomes preoccupied with trying to capture Ms Ice Sandwich in art, obsessively drawing her facial features line by line and eyelash by eyelash.

The boy also gravitates toward Tutti, a girl in his class who was given this nickname (by the narrator himself, no less) after she once farted in class. Like the boy, Tutti is a bit strange, and she’s obsessed with gunfights. The boy learns that she lives alone with her father, who has filled their apartment with shelves of DVDs and makes time to sit down and watch a movie with her every week. Tutti’s love of gunfights stems from her interest in cinematic choreography, and the boy appreciates her ability to mimic calmness in the face of danger in the same way that he’s awed by the no-nonsense attitude of Ms Ice Sandwich in the face of customer rudeness.

Meanwhile, the boy’s mother is a weird one herself. Although the boy isn’t entirely sure what she does, she seems to be a self-employed spiritualist and fortune teller, and she’s recently had part of their house remodeled to resemble a caricature of a Western palace complete with a red carpet, foreign furniture, heavy curtains, and statues of angels. While the boy’s grandmother is bedridden in the back of the house, his mother spends an inordinate amount of time online, typing on her phone even when she’s out shopping. Like Tutti and Ms Ice Sandwich, however, the boy’s mother isn’t actually a bad person, and she loves her son in her own way.

The boy is perhaps ten or eleven years old, and Kawakami’s first-person narration skillfully captures his close attention to small and seemingly insignificant details, which are contrasted against a larger cluelessness concerning how the world works. The narrator doesn’t really know what’s going on with his mom, or his grandmother, or Tutti’s dad, or even Ms Ice Sandwich, but he nevertheless observes them with care and compassion. He is content to observe the movements of the people in his life until Tutti startles him out of his passivity, saying,

“When you say see you tomorrow to someone, it’s because you’re going to keep seeing them. It’s like at school you see everybody because they go to school every day. But when you graduate and you don’t go to school anymore, it stops and you don’t see everybody any more. If you want to see somebody, you have to make plans to meet, or even make plans to make plans, and next thing you end up not seeing them any more. That’s what’s going to happen. If you don’t see somebody, you end up never seeing them. And then there’s going to be nothing left of them at all.” (75)

Ms Ice Sandwich has no real plot or denouement, but Tutti’s words spark a small but significant shift in the narrator’s worldview that allows him to more fully appreciate the fact that his mother, his grandmother, and Ms Ice Sandwich all have lives that exist independently of his presence. Judging from the cover copy it might seem as if this is a novella about a boy’s sexual awakening, but the story actually hinges on a far more subtle emotional revelation. Thankfully, the narrator’s perspective is so singular and well-crafted that Ms Ice Sandwich‘s message about the ephemerality of human connection is never in any danger of becoming trite and sentimental.

According to the colophon, “This piece was published in the literary journal Shincho first in 2013, and in 2014 it was included in the novel Akogare, which is a combination of two stories: ‘Miss Ice Sandwich’ and ‘Strawberry Jam Minus Strawberry.'” At roughly ninety pages, Ms Ice Sandwich is short enough to read in one sitting, but it’s still substantial enough to feel like a self-contained world. I thoroughly enjoyed this story, and I’m impressed by the fantastic work that Pushkin Press has put into its ongoing series of translations of quirky Japanese novellas.