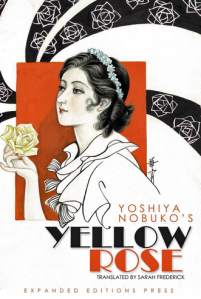 I’m absolutely thrilled to write that one of Yoshiya Nobuko’s stories has finally appeared in a readily available English translation. “Yellow Rose” is drawn from Yoshiya’s acclaimed collection Hana monogatari (Flower Stories), which first appeared in print in the 1920s and has been a major guiding influence in shōjo manga, literature, and aesthetics. Thankfully, Yoshiya’s fiction is not just important from the perspective of literary history but also a true delight to read.

The short story “Yellow Rose” is about Katsuragi Misao, a twenty-two-year-old college graduate who accepts a teaching post at an all-girls prefectural academy “a thousand miles distant from Tokyo” to avoid getting married. On the train departing from Tokyo she meets Urakami Reiko, who happens to be a student entering her final year at Katsuragi’s school. Reiko is running late; and, clutching a bouquet of yellow roses, she dashes across the platform to catch the train, just barely making it:

Perhaps because she had been running so fast her little chest beat wildly, sending the profusion of flowers in that single hand all a-tremble, and this quivering of the yellow rose bouquet moved in unison with the fluttering of the girl’s sleeves – it was a beautiful scene–

Reiko gets a grain of soot in one of her eyes, thus giving Miss Katsuragi a chance to be alone and in intimate contact with her as she administers aid:

The end of her ponytail stretched down below the pillow, and a wisp of stray hair lay on her white forehead; her cool eyes were both gently closed and just her lips moved with her breath like a flower – in the stillness of a moon perhaps her closed eyes were seeing a dream……ah, how lovely!

The two continue their association throughout the summer, and their romance blooms in a series of short vignettes, of which the following is representative:

Thus carries the sound of the bell down to the water at Kiyomigata shore. It must be from the Seikenji Temple bell tower in Okitsu –

Motionless on the beach shadows……two of them

Twilight, the moon thinly visible at the yonder edge of the sky – as they neared the shore only the very faint tips of the breaking waves sported a faint whiteness, like frayed silk tassels.

Miss Katsuragi and Reiko make plans for the girl to attend Katsuragi’s alma mater in Tokyo before embarking on a journey to the United States together, but Reiko’s mother expects her to enter an arranged marriage immediately after her graduation in April. At the end of the story, as Katsuragi boards a ship to Boston alone, she abandons herself to her grief.

As with many of the stories contained within Yoshiya’s Hana monogatari, “Yellow Roses” ends in tears. The story’s focus is not on plot, however, but rather the beauty of the two young women and the depth of their feelings for one another. Entire paragraphs are spent on detailed descriptions of mournful eyes and chiseled cheekbones, and the poetry of Sappho is quoted at length. As in the above passages, Yoshiya’s writing is characterized by fragments and ellipses, which heighten the emotional impact of certain scenes while leaving the reader free to fill in the suggestive gaps in the text with her imagination.

“Yellow Roses” can be a quick and feather-light read, but the reader is rewarded for returning to the story a second time, as many of its passages can be appreciated as jewels in a beautiful setting – or roses in a stunning bouquet.

Although the story alone would be well worth the price of admission, this publication is graced by the addition of an extended translator’s introduction, a fascinating note on the cover illustration, an extensive selection of illuminating endnotes, and a meticulously curated list of selected English-language readings that functions as an invaluable resource to anyone interested in the history and inner workings of shōjo culture in Japan from the nineteenth century onward.

Translator Sarah Frederick’s introduction, which is roughly as long as the translated story itself, functions as something of an abbreviated textbook, touching on not merely the author and the story but also many aspects of the society and publishing culture that form its context. Frederick’s writing is not mired in the academic garble of postmodern theory but is immediately accessible to a casual reader as it paints a picture of a time and place in broad yet deliberate strokes. What I especially appreciate about this short essay is that it directly confronts the issue of female queer sexuality in Japan:

While it is not difficult to frame these desires via the flexible contemporary category of “queer,” it may be surprising to some readers that to invoke the word “lesbian” for Katsuragi and Urakami’s relationship, Flower Stories, or Yoshiya’s work and life more generally, has sometimes been controversial. I think this is a wonderful question to raise and discuss in a classroom or elsewhere using the story itself, and no translator’s introduction can “answer” it. […] While the term “lesbian” or loan word “rezubian” were not used in these stories or by Yoshiya herself in her lifetime, they are used literally here in reference to Sappho from Lesbos. More broadly, the claim that “lesbian” does not apply in the Japanese context or the prewar Japanese context (both arguments are sometimes made) leans far too much toward cultural essentialism and the false sense that Japan was cut off from the rest of the world, including its varied discourses on sexuality. The impression given by “Yellow Rose” and its milieu is rather the opposite: a highly cosmopolitan girls’ culture, aware of Sappho as a figure available to express the desire of one girl for another. It is engaged in active exploration of the rich but incomplete solutions posed by the possibilities of western philosophy, emotional poetry, and travel to America as sources for different ways of thinking about the realities and aesthetics of women’s lifestyles, desires, and conceptions of love.

The words in bold are my own emphasis, because I’ve been waiting for someone to state that very point as clearly and succinctly as Frederick for years now. Yes Virginia, there are queer women in Japan! The next time anyone asks me whether we can really call portrayals of homosexuality in Japan “gay,” as if the Japanese archipelago were home to a bizarre alien society completely removed from the cultural currents flowing across the rest of the world, I am going to quote this passage word for word.

The main appeal of “Yellow Rose” and its introduction really isn’t in any sort of political statement, however. Instead, the reader is invited to enter a sparkling, rose-colored world of radiant young women, their pure yet dangerous emotions, and the tragic pressures of a bygone era that prevent them from expressing their truest selves. As Frederick explains in her introduction, there is no better place to go looking for the roots of shōjo manga and literature. The translation itself expertly captures the language and cadences of the girls’ literature of writers such as Frances Hodsgon and Louisa May Alcott (whose work Yoshiya was almost certainly familiar with), so even the English feels pleasantly nostalgic. I therefore recommend “Yellow Rose” not only to serious academic types and hardcore shōjo fans but to even the casually curious. Within the short span of a train or subway ride, you can be transported into a glittering space removed – but never too removed – from the grittiness of the mundane. It’s quite an experience!

Yellow Rose is currently available exclusively as a digital text, and it can be purchased on Amazon’s Kindle store. It will also soon be available directly from the website of its publisher, Expanded Editions, a shiny new operation with two translations of vintage Japanese science fiction ready to download. Even if you’re not interested in Yellow Rose, be sure to check out Expanded Editions, which has done a fantastic job with its digital texts.

The manageable length and impeccable scholarship of Yellow Rose recommend it for classroom use. For educators hoping to incorporate the text into a printed or PDF course pack, Expanded Editions offers educational sales and will work directly with campus bookstores to make the material available to students. More information can be found on the relevant section of the publisher’s webpage.