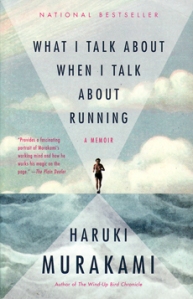 Yay! Another Murakami book has come out in paperback! Yay! It’s translated by Philip Gabriel (the author of Spirit Matters: The Translucent in Modern Japanese Literature and veteran Murakami translator)!

Some critics say that people would read Stephen King’s grocery list if he published it. Although I’m not sure I would go that far, I certainly enjoyed King’s essay On Writing. Although I was disappointed that the newest Murakami translation isn’t one of his earlier novels (Hear the Wind Sing, for example, or Pinball, 1973) or his latest novel (1Q84) but a memoir-length essay on running, I decided to go ahead and read it. Because some writers, yes, I will read anything they publish. Even a log of miles run per month.

Over the course of my career as a student of Japanese, I have come to realize that the essay is still a thriving form of literature in Japan. It sometimes seems like every popular writer from Yoshimoto Banana to Murakami Ryū has at some point published at least one collection of essays. Instead of taking the form of concentrated inquiries into a single subject in the style of John McPhee, however, most of these essays are personal in nature and written in a light-hearted tone. What I Talk About When I Talk About Running is much the same. The memoir is conversational rather than educational and a pleasure to read.

The tone of the book is honest and self-effacing. Although it’s quiet, Murakami has a definite sense of humor that balances out his more contemplative passages. Aside from the fact that I don’t think he mentions drinking whiskey or cooking spaghetti even once, Murakami could very well be one of his infinitely personable narrators. Even though I have almost zero interest in running (or writing novels) myself, I was fascinated by these essays. I’m glad they were translated and published in America.