Some people say that Miyabe Miyuki is the Stephen King of Japan. I’m not sure exactly what that means, but I think it has something to do with the fact that she has published a hell of a lot of books (as well as scripts for radio dramas, manga, and video games). Her work is superlatively popular, and a great deal of it is dark or fantastic. She is perhaps best known in America for her murder mystery novels, which more often than not feature a killer who uses a magical or semi-magical power as his or her modus operandi.

The killer in The Devil’s Whisper is a hypnotist, as the book’s title implies. (I think I may have just given away what one of the blurbs on the back cover calls “a brilliant plot twist,” but I found it fairly obvious from the beginning of the novel.) He has hypnotized a young woman to run out in front of a taxi, thus making her death seem like a suicide. So far, so good. The driver of the taxi, however, is charged with vehicular manslaughter and imprisoned. His sixteen-year-old nephew, Mamoru, senses something fishy about the police reports and decides to investigate the matter himself. Mamoru is basically a decent kid, but he’s got some skeletons in his closet that come out to haunt him as the story progresses. The novel therefore presents two mysteries to the reader: what grudge does the hypnotist killer have against the women he murders, and why did Mamoru’s father abandon him and his mother when he was a young child? The way that these two plotlines come together at the end of the book is quite interesting and enjoyable.

Although The Devil’s Whisper does not suffer from an abundance of characterization, almost everyone comes off as sympathetic. Mamoru does indeed bear traces of several Stephen King characters like Danny from The Shining and Jack from The Talisman, who are bright and earnest boys placed in difficult situations. The killer comes off as a kind of Hannibal Lecter figure, as logical and urbane as he is insane. The real villains of the novel actually seem to be the young women who are being killed, although the reader is forced to wonder whether they really deserved to die.

In my eyes, the major weakness of Miyabe’s style is that she tells her reader what every character is thinking. This doesn’t necessarily have to be a flaw, but Miyabe will occasionally write entire sequences of paragraphs explaining the obvious. One of the first pieces of advice given to aspiring writers is to show, not tell. A relative clause depicting a character picking at her fingernail can say much more about her state of mind than an entire paragraph attempting to chart what is going on inside of her head. Since The Devil’s Whisper is only about 250 pages long, this type of inner explication is by necessity kept to a minimum, and a great deal of it is expressed in dialog, which partially reduces the level of tedium and keeps the action moving. Miyabe’s characters are interesting; but, unfortunately, none of them are so interesting that I want to know every thought that passes through their minds.

Overall, Miyabe’s mystery novels range from excellent (All She Was Worth) to decent (Shadow Family) to so horrible that they make me want to claw my eyes out (Crossfire). The Devil’s Whisper falls somewhere in the middle, and I would recommend it over many of Miyabe’s other titles available in translation.

This past fall, I took a seminar on ukiyo-e, or Japanese woodblock prints depicting the “floating world” of the Edo period (1600-1868) urban pleasure districts. As we studied the courtesan prints of artists like Kitagawa Utamaro, we kept running up against the same issue: prostitution. Namely, what were the lives of the women painted by Utamaro really like? Were these women as glamorous as they seem in ukiyo-e, or were they sex slaves who lived miserable lives and died at an early age of starvation and disease? Or did they perhaps fall somewhere in between the two extremes, victims of their fates but still holding on to a measure of personal agency and control over their lives? As our class debated this issue, I couldn’t help but think about The Budding Tree.

Kitahara’s short story collection The Budding Tree is not about courtesans, but it is about Edo-period women who have close connections to the floating world. Each of the six stories in this collection has a different female protagonist: a Confucian tutor, a calligrapher who pens text that will be printed as gesaku popular novels, a singer of jōruri popular stage ballads, a hairpin designer who manages her own store, a rising print artist who works with Utagawa Kuniyoshi’s publisher, and the manager of an exclusive restaurant. Although the women don’t know each other directly, their stories are connected in small ways, and a unity of theme ties these stories together into a cohesive whole. Each of these women is struggling to make it in a man’s world, and each therefore leads a somewhat complicated love life.

I’m not an expert on the Edo period, so I’m not sure how realistic Kitahara’s depiction of her setting (Edo at the turn of the nineteenth century) actually is. From what I know of the lives of Hokusai’s daughters (especially Katsushika Ōi), however, her depiction of urban working women at the time isn’t too far off. As historical fiction, the stories in The Budding Tree are interesting and satisfying, especially since the swashbuckling samurai that one usually encounters in Japanese historical fiction are kept offstage. It is my (perhaps futile) hope that Ian MacDonald’s excellent translation will find a wide audience, so that other Japanese female-centric historical fiction, such as the Edo-period female detective stories of Miyabe Miyuki, will find their way into American bookstores.

I therefore recommend The Budding Tree to anyone with an interest in the Edo period, historical fiction, women’s literature, or just plain good romantic stories. The one caveat I might offer concerns the translation’s complete absence of footnotes. There are more than a few non-translated and non-glossed terms (such as jōruri, i.e., the songs of the puppet theater) that appear with frequency throughout the text, as well the names of actual historical figures and geographical landmarks with which a casual reader might not be familiar. Hopefully, however, the stories themselves will whet the reader’s appetite to learn more about the world of early nineteenth century Edo. 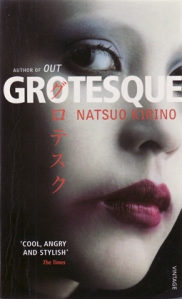 First of all, I would like to say that Grotesque is a very, very dark novel. It’s also filled with descriptions of all sorts of physical and emotional abuse, as well as numerous scenes of disgusting, extremely upsetting sex. In short, this novel is not for the faint of heart.

The novel essentially consists of the nameless narrator’s account of the murder of her younger sister, Yuriko, and her pseudo-friend from high school, Kazue, each of whom were marred by deep psychological imperfections. These emotional deficiencies were exacerbated by the harsh and competitive nature of the exclusive private high school that the two attended. In the end, both Yuriko and Kazue became prostitutes and were both ultimately murdered by the same unsavory client.

Putting the sensationalism of the novel aside, perhaps the most chilling aspect of Grotesque is the voice of the narrator. The reader quickly becomes inured to the sex and violence, but the cold and bitter tone of the narrator, as well as her pronounced disgust with her fellow human beings, continue to add a tinge of horror to the novel until the very last page. The narrator occasionally interrupts herself to present “evidence” concerning the two murder cases: the diary of her sister, the testimony of the murder suspect, and a letter from her old classmate. These stories within the story allow the reader to experience the voices of the novel’s other main characters, each of whom is just as disturbing as the main narrator.

In America, Kirino is mainly known for her first translated work, a massive chunk of a murder novel called Out (アウト, translated by Stephen Snyder). Like Out, Grotesque is long and depressing, and it would be a stretch to call any of the characters sympathetic. Unlike Out, however, Grotesque has a much smoother style, courtesy of translator Rebecca Copeland, and is therefore much easier to read. Also, compared to Out, the characters of Grotesque are much more artistically presented. Namely, in this novel, Kirino chooses to explore her characters’ depravity instead of merely wallowing in it. Moreover, I found the portion of the book that concerns the narrators’ experiences at their high school to be extremely entertaining. As I said earlier, Grotesque is not for the squeamish, but those readers who can deal with the darkness will be pleased to find an occasional glimmer of good writing and entrancing character study.

I should note that the version of Grotesque I reviewed is the British version, which I purchased in Japan. The American version of the book has been edited to remove all references to male child prostitution. Don’t let this deter you from reading the novel, though – the passages that were cut aren’t particularly riveting or important.