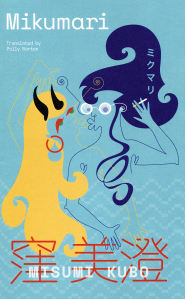 Mikumari is one of the chapbooks published as part of the Keshiki series, which is intended to showcase “the work of some of the most exciting writers working in Japan today” and is “a unique collaboration between University of East Anglia, Norwich University for the Arts, and Writers’ Centre Norwich, funded by the Nippon Foundation.” A great deal of talent has gone into the creation of these beautiful chapbooks, and it shows in the high quality of the publication, the design, and the translation.

The nameless first-person narrator initially encountered his partner, who calls herself Anzu, at the Comiket fan convention, and when they get together for sex they cosplay as characters from Anzu’s favorite anime. Meanwhile, the narrator works a summer job as a lifeguard at a pool, and he has a crush on one of his fellow teenage coworkers, Nana. In my reading of the story, however, the narrator’s strongest relationship is with his mother, a midwife who delivers babies in their apartment. After the narrator’s father left her with a young son, she raised him as a single mother, and she has occasionally asked him to help deliver babies when her regular assistants are unavailable. As it happens, he’s quite good at it.

What seems to be the selling point for Mikumari – namely, kinky otaku sex – is more of a veiled analogy for how the narrator is still in the process of growing up. There are still parts of him that are childlike, like his innocent schoolboy crush on his lifeguard coworker Nana, while there are parts of him that are already admirably mature, such as the fondness and protectiveness he feels for his mother, as well as the care he gives his mother’s clients, whom he views without the slightest bit of disgust. Even for a decent person like the narrator, however, growing up is never a smooth slope, and his final breakup with Anzu dramatizes the bumps along the way.

Lest the reader think that Anzu is nothing more than a narrative device to showcase the male narrator’s character development, however, it’s important to note that she has her own narrative arc, as well as a respectable sense of dignity. Misumi Kubo’s portrayal of her characters is nuanced but sympathetic; and, even though the short story doesn’t end in a way that’s easy draw lessons or even conclusions from, it’s a satisfying work of literary fiction.

Mikumari also has its fair share of bullet vibrators, frenzied against-the-wall sex, detailed accounts tongue-on-clitoris action, and lines like “Put your cock in me,” but who says literary fiction can’t be at least a little fun sometimes?

Kudos to Glen Robinson for the cover illustration and book design, because Mikumari is a really cool little chapbook. It can be ordered directly from Strangers Press, which ships internationally.