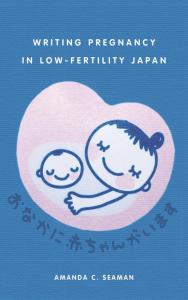 This guest review is by Tyran Grillo (@tyrangrillo on Twitter).

Amanda C. Seaman’s Writing Pregnancy in Low-Fertility Japan is a masterfully written and timely monograph. It explores the role of pregnancy, if not the pregnancy of roles, concerning women as subjects within, and creators of, Japanese literature in a time of social restlessness around questions of procreation.

In her first chapter, “Write Your Mother,” Seaman seeks to define the practical and symbolic overtures of pregnancy as literary trope. Summarizing not only the large amount of literature on pregnancy and childbirth, but also the media blitz on Japan’s falling birthrate and rising aging population, she rightly asks: Does there continue to be a national obsession with all things baby? None have given this question proper attention, and Seaman’s work provides a compelling response. In addition to a widespread media blackout on this question, even less attention is paid to “cultural, artistic, and intellectual responses to and representations of pregnancy and childbearing in the ‘low fertility’ age” (1). This, Seaman claims, lenses a unique perspective on pregnancy as a metaphorical site for the actual bodies undergoing misunderstood changes.

Seaman is concerned with how women writers are using storytelling as response mechanism, and to make this point focuses on works of Takahashi Takako, Itō Hiromi, Ogawa Yōko, Tadano Miako, and Hasegawa Junko, among others. While politicians and other policy makers have taken it upon themselves to make pregnancy a matter of intense public interest, these writers make it matter of intense private interest, albeit in the decidedly public format of mass-market publishing.

Seaman’s book opens with an erudite summary of the scare regarding declining birth rates from the end of the Pacific War to the present century. Despite surface-level concern and efforts, Japan’s government has done little to promote childbearing in any way amenable to actual women. As the media continues to propagate a sugarcoated version of marriage and childbirth, the realities explored by Seaman’s writers of interest reflect an unabashed landscape of “danger, repression, destruction, or pain” (4). Their focus on bodies as continents shifting to the seismic activity of public opinion ensures that the self becomes not simply a beacon but a lightning rod to political provocation.

Explicit discussion on the printed page of women’s fertile bodies in such intimate terms is a relatively modern concession, and before its advent women’s bodies were relegated to a relatively impressionistic realm of unclean impulses and male-defined mystery. Yosano Akiko, notes Seaman, was instrumental in bringing an embodied approach to pregnancy and childbearing in the early 20th century, as well as for addressing the suffering involved in both. Her call was not taken up by many, although it did spark the “maternal turn” promulgated by such writers as Okamoto Kanoko. After the Pacific War, women’s maternal roles were more intimately associated with carbon-copied nuclear family archetypes. Only in the 1960s and 1970s did a “new wave” of women writers emerge. Among them, Tsushima Yūko reclaimed motherhood, in all its ups and downs, as something distinctly women’s own. Pregnancy manga soon followed in the early 1990s, and Seaman includes analyses of quintessential examples.

The title of Chapter Two – “Hey, You, Get Out of My Womb!” – references pregnancy as both a literal and metaphorical cipher of invasion. In this chapter, Takahashi Takako, Takekawa Sei, and Ogawa Yōko are shown to focus on the alien aspects of pregnancy. Seaman opens with an poem by Yosano Akiko that pays homage to folkloric themes newly applied to pregnancy. This sets a precedent for writers to come by exploring the ambivalences of the womb and using horror as a device of interruption. By capitalizing on the latter tropes, these writers challenge the characterization of pregnancy as uneventful. In Takekawa Sei’s “Tsuki no nai yoru ni” (On a moonless night), we encounter fantasy as manifestation of fear of sexuality in tandem with childhood trauma. And yet, Seaman concludes, “nothing can supersede the maternal instinct, not even the personal wishes or well-being of the maternal subject herself” (26). Takahashi Takako’s “Kodomo-sama” (Holy terror), on the other hand, takes fears of pregnancy into monstrous dimensions, while Ogawa Yōko’s “Ninshin Karenda” (Pregnancy diary) is alienation incarnate. Seaman characterizes the latter story as a modern fairy tale in its evocation of a collective unknown as it spirals into a pseudo-scientific and occult-like framing of family bonds and communication. She further notes an overarching ambiguity at play in all of these stories.

Chapter Three, “And Baby Makes One,” examines pregnancy and its connection to notions of escape and reformation of personal identity. Both Hasegawa Junko’s “Museiran” (The unfertilized egg) and Tsushima Yūko’s Chōji (Child of fortune) deal with women treating pregnancy as an escape and motherhood as a “type of personal salvation” (52). Seaman reveals motherhood as a leitmotif throughout Tsushima’s oeuvre in constant negotiations of opposites – both in the physical and emotional sense. The 36-year-old protagonist is on the cusp of losing her womanhood (at least from society’s point of view), and the narrator recalls the indifference with which she treated her present daughter, finding peace only when her maternity slips away from conscious reiteration. Hasegawa’s “Museiran” goes further in its depiction of a painful hermetism, but both authors make use of dreams and fantasies, using the power of pregnancy to go beyond the playing field of romance in the shadow of failure.

Pregnancy as a way to partnership is the subject of Chapter Four, “Manual Labor,” which discusses millennial writers Kakuta Mitsuyo and Tadano Miako. Seaman sees both as challenging what she calls “canonical pregnancy,” by which is meant the “ideals and practices promoted by pregnancy literature” (81). Such literature “trains” expecting mothers to become realizations of the ideal, as if such extraneous knowledge were only available in magazines, books, and guidelines and not in the hardwired mechanisms of the female anatomy, which are carefully monitored by doctors and, after a child is born, education systems. Everything the mother does during pregnancy is believed to have a direct outcome in the birth and subsequent development of the child, even as little is said in such literature about a mother’s relationships with others in her life.

Kakuta Mitsuyo’s Yoteibi wa Jimi Peiji (My due date is Jimmy Page’s birthday) and Tadano Miako’s Sannen migoromu (The three-year pregnancy) rework the canonical pregnancy as “an emphatically social enterprise” (85). In Kakuta’s novel, a seemingly textbook pregnancy churns the protagonist’s mind into a slow, diaristic unfolding of ennui over, and alienation from, her growing fetus. Paradoxically, the story underscores and unravels restrictive pregnancy norms as she settles into the reality with relative peace and acceptance. Tadano is less introspective and more humor-oriented, choosing instead to follow surreal sequence of events, thereby underscoring folkloric tendencies and problematizing the notion of self-made mothers.

Chapter Five, “Riding the Wave,” moves on to tropes of pregnancy manga, texts that allow Seaman to discover novel ways of depicting the pain of childbirth in their deft mélange of humor and critique. From Itō Hiromi’s illustrated 1984 manual Yoi oppai, warui oppai (Good breasts, bad breasts) to the manga collection of 12 short stories, Go-shussan! (Birth!), published by the editorial collective known as “Cream Puff” (Chou Crème), Seaman notes a metaphorical hyper-realism at work. Using symbolic imagery “in favor of an affective but rather static emphasis on motherhood” (129) in personal narratives that challenge medicalized notions of pregnancy in dealing with a matrix of pain for which they feel ill prepared, while their use of humor, as Seaman observes, “counteracts the impression that the pregnant body is grotesque or abnormal” (143).

These themes are deepened in the sixth and final chapter, “Em-bawdy-ing Pregnancy,” which offers a deep reading of Uchida Shungiku’s eclectic blend of critique and family values-focused conservatism. Her controversial book of autobiographical fiction, Fazaa Fakkaa (Father fucker), examines a life of abuse at the hands of an unnamed stepfather. Seaman looks beyond the obvious sexual perversions of the novel to its catalytic pregnancies. The manga series Watashitachi wa hanshoku shite iru (We are breeding) is an optimistic yet no-less-frank examination of pregnancy. Uchida’s experiential mixture of realism and exaggeration makes manga a suitable vehicle for self-expression, by which she delineates personal experience outside the trigger-happy realm of politics.

In her Afterword, Seaman concludes on an open-ended note: “It remains to be seen whether literature can offer a similarly [i.e., to manga] compelling, challenging, and idiosyncratic account of what it means to become a mother in millennial Japan” (182). The keyword in Seaman’s statement here is “account,” which underscores the importance of personal experience. The implicit question of this study, however rhetorical, inspires us to think beyond the script of pregnancy in search of individual connections and to view said connections not as objects of fetishizing scholarship but as the voices of living human beings.

Tyran Grillo is a Dorothy Borg Postdoctoral Scholar in East Asia and the Americas at Columbia University (link). Tyran received his doctorate in Japanese Literature in 2017 from Cornell University, where his research focused on (mis)representations of animals in Japanese popular culture, as well as intersections of Asian Studies and Posthumanism. He has been a professional translator for over a decade, translating twelve books of Japanese fiction into English to date, including Parasite Eve by Sena Hideaki (Vertical, 2005), Paradise by Suzuki Kōji (Vertical, 2006), and Mr. Turtle by Kitano Yūsaku (Kurodahan Press, 2016). Alongside his academic life, Grillo is an avid arts critic, having written over one million words of impressionistic reviews and essays on music, performance, and film on his website, Between Sound and Space.

The website Dissertation Reviews recently invited me to review the dissertation of Tiffany Hong, who is currently an Assistant Professor of East Asian Literature at Nazarbayev University. Hong’s dissertation, titled Teleology of the Self: Narrative Strategies in the Fiction of Murakami Haruki, is an investigation of the postmodern aspects of Murakami’s storytelling framed by a discussion of the transnational publishing market that has launched the author into literary stardom.

Here is a short except from my review:

Tiffany Hong’s dissertation is primarily concerned with the developments in the narrative strategies of the internationally acclaimed and bestselling novelist Murakami Haruki, especially as these strategies respond to the relationship between the individual and the history of the Japanese state. While many scholars have examined the meaning of plot and symbolism in Murakami’s stories, Hong’s readings of four of his most well-known novels contribute a valuable perspective on the intersections between the author’s personal politics and his use of self-narrativization through diegetic and metadiegetic elements often associated with magical realism. Hong captures what makes Murakami’s novels so successful in engaging the reader by tying his work into larger discussions regarding the transformative potential of fiction.

You can read the full review on Dissertation Reviews.

( The header image is by Grant Snider, the artist of Incidental Comics. )