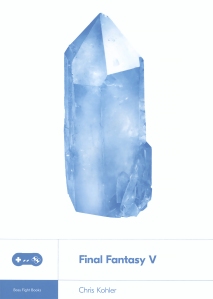 Final Fantasy V is a book about the experience of growing up in the 1990s and discovering Japan by way of video games. This story is familiar to many people who came of age along with the internet, and Chris Kohler, who was born in 1980 and currently works as an editor at Kotaku, is the perfect person to tell it.

The book opens with a history of the early Final Fantasy series narrated from the perspective of the author, an American who has to glean bits and pieces of knowledge from magazines like Nintendo Power. Kohler also had access to computer industry trade magazines with ads in the back, which is how he came to acquire a Japanese copy of Final Fantasy V. His account reads like a child detective story, and I especially enjoyed how he dramatizes the process of “unlocking” the Japan-specific cartridge by manually prying off a set of small plastic tabs.

Kohler later coauthored the first fanmade English-language Final Fantasy V FAQ guide. This expansive document was meant to help Final Fantasy fans make sense of the Japanese-language game, which was circulated online as a ROM file that could be played on any number of software programs that emulated the Super Nintendo gaming console. Kohler discusses how the content of the game was officially and unofficially translated and retranslated, as well as why it was worth translating. Kohler also goes into rich and fascinating detail about the online cultures that have formed around Final Fantasy V, as well as many other Japanese RPGs that were slow to receive an English-language release.

Final Fantasy V is about a specific video game, but it’s also about how the gaming subculture of the 1990s explored and embraced the potential for communication across linguistic and cultural barriers. Even if you’re not particularly interested in the Final Fantasy series or video games in general, this short book is a lovely memoir of the early internet era. Final Fantasy V stands alongside Leigh Alexander’s Breathing Machine as a representative example of the excellent narrative nonfiction created by the generation of people between Gen X and the Millennials who grew up along with the internet, with all the weirdness and thrill of discovery that entails.

Chris Kohler is also the author of Power-Up: How Japanese Video Games Gave the World an Extra Life. Although it shows its age (in a dignified manner, of course) as a book that was written during an earlier period of gaming history, Power-Up is still an immensely fun read, and it contains a wealth of treasure for fans of the Final Fantasy series and people interested in how Japanese pop culture has been translated, localized, and interpreted by a global audience.