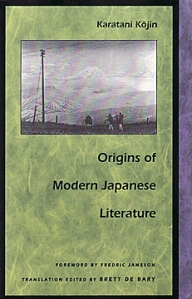 Is this book really an academic work? I wonder. If I had to guess, though, I would have to say no. Origins of Japanese Literature belongs to a genre of non-fiction writing called hyōron in Japan. This sort of writing, while focusing on an academic topic, is more of a discussion than a well-researched argument with a thesis. The writer, generally a professor, draws on his or her vast knowledge of a subject in order to discuss it at length, centering on a few key ideas that other, more scrupulous scholars, can be inspired by.

The chapters in a book of the hyōron genre tend to be only loosely tied together thematically, as they were written over the course of several years in the life of the writer for various occasions. One chapter may have been an afterward to a zenshū (“Collected Works”), one may have been a guest lecture, and another may have actually been written as an academic paper. Footnotes and other references are few and far between, although many texts are quoted at length. As a result, reading a book of hyōron is like sitting down with a professor over a cup of tea in his study and listening to him talk about whatever he finds interesting at the moment. If you share the same interests and know enough about the topic to catch the references, it can be quite an enjoyable experience.

Karatani Kōjin is, for the moment, very interested in Japanese modern literature, or the literature of Japan during the Meiji (1868-1912) and Taishō (1912-1926) periods. During the Meiji period especially, Japan underwent the process of modernization at an extraordinarily rapid pace. Along with Western science and technology came modern ideas such as “nation,” “an interior self,” and “literature.” The formation of “literature” is especially interesting to Karatani, because, through literature, we can see the development of so other important elements of modernity.

If Karatani can be said to have a central thesis in this work, it would involve something that he calls “The Discovery of the Landscape,” which is the title of his first chapter. Before the onset of modernization, Japanese artists and poets, such as Buson and Bashō, understood the physical landscape of the natural world to be a reflection of their inner selves, which extended outward indefinitely. In pre-modern literature, for example, there is no distinction made between narration and speech, nor is there any distinction between the voices of different characters. Karatani argues that, during the process of modernization, Japanese artists and writers came to see the physical landscape as something outside of themselves that they could depict objectively and realistically. Other people, in the form of fictional characters, could be treated in the same way. Naturally enough, this discovery of exteriority led to a discovery of interiority, and these two phenomena together worked to create all sorts of modern concepts, such as illness, confession, the child, and literature itself. It’s an interesting argument, even if you don’t happen to agree with it.

For those of you interested in modern Japanese literature, Origins of Japanese Literature reads like a “Greatest Hits” playlist, as Karatani touches on most of the canonical modern authors while delving not so much into their fictional work as into the fragments of literary thought and criticism they left behind. Brett De Barry and her team of translators has done an excellent job of rendering Karatani’s text into polished and enjoyable English, and Ayako Kano in particular has undertaken the grueling task of annotating the text. The translators have helpfully provided a glossary of key figures and movements in the back of the book, and Fredric Jameson has not so helpfully provided an interesting yet characteristically unintelligible foreword at the front.