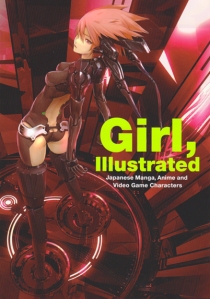 A few days ago I was killing time in the Borders next to Penn Station in New York City. I love this Borders. Not only do they allow people to sit on the heating vents next to the windows when it’s freezing outside, but they also have the largest and best-stocked manga section of any brick-and-mortar bookstore I’ve ever been inside. Every time I visit this Borders I find something that I had no idea had even been published. This time I found several copies of Girl, Illustrated. While I was flipping through one of them, I kept thinking about the recent New York Times article titled “In Tokyo, a Crackdown on Sexual Images of Minors.”

I am not a big fan of the article. For one, it doesn’t bother to introduce Ishihara Shintarō, his racism, his sexism, or his vocal ultra-nationalist political stance. So, when Ishihara is quoted as saying of the media in question that “These are for abnormal people, for perverts,” his statement seems only natural from a moral perspective. (Although one does chuckle a bit when he says, “There’s no other country in the world that lets such crude works exist.”) Indeed, the media that Ishihara hopes to censor is sensationalized as child pornography, and an impartial reader has no choice but to view it with disgust. It is only in the very last line of the article that someone is quoted as saying, “It’s a completely imaginary world, separate from real life.”

I wish the journalist who wrote the article, Hiroko Tabuchi, had played up this side of the debate more. I wish she had mentioned that, while Ishihara and his cohort are drafting legislation against the depiction of imaginary girls, they are also fighting an ongoing battle against feminists who want to change the law that doesn’t allow a married couple to maintain separate surnames (which hinders the career development of many female professionals). I wish these things because, in the past two weeks, enough people have quoted from or referenced the article that I am starting to fear how it may have influenced a non-specialist’s view of Japanese popular culture.

As all of this ran through my mind while I paged through Girl, Illustrated, I decided that the best way to look at Japanese illustrated images of girls is to actually look at Japanese illustrated images of girls. I would therefore like to review Girl, Illustrated, a bilingual art book published in Japan and available in America through online retailers like Amazon, Borders, Barnes and Noble, and Tower Books. Before I begin, I would like to state that this book does not contain child pornography. I myself do not support child pornography, and it is not my aim to defend or justify it in any way. Instead, I hope to challenge common notions regarding “anime-style” Japanese illustrations of young women.

The style of illustration in question is known as bishōjo-kei, or “bishōjo style,” with “bishōjo” meaning “beautiful young woman.” A bishōjo (as opposed to a regular shōjo, or “young woman”) is usually a female protagonist or central supporting character in a manga, anime, or light novel that belongs to a genre generally regarded as being targeted towards a male audience, like science fiction or adventure fantasy. Good examples might be Nausicaä (from Nausicaä of the Valley of the Wind), Nadia (from Nadia: The Secret of Blue Water), or Ayanami Rei (from Neon Genesis Evangelion). Bishōjo are rooted firmly in fantasy, whether that fantasy is a post-apocalyptic technological wasteland or a halcyon senior year of high school. They need not be connected to an actual narrative, however, and are often depicted in original artistic compositions.

Girl, Illustrated is a collection of such compositions. Each artist is allotted two pages and four to six full-color illustrations. Accompanying these images is a section for information about the artist, which includes fields for the artist’s birth date, gender, hometown, webpage, inspiration, and comments. More often than not, most of these fields have been left blank, but the information is written in both English and Japanese when it is available. Unfortunately, the translation isn’t always perfect. For example, something like 銃器・武器と女の子を描く (drawing girls with guns or other weapons) might become something like “drawing girls in their underwear with guns,” but these short artists’ comments are still fun to read.

This being said, the main draw of Girl, Illustrated is what the artists say with their illustrations. Through affective character design and rich, detailed backgrounds, each of these illustrations wordlessly suggests a story. The vast majority of these images have been created with digital ink in programs like Photoshop, Illustrator, and PaintTool SAI. Although most of the artists choose not to reveal their gender, judging from those that do, it seems that 2/5 are female. Among these female artists are young professional illustrators like Sakizou, Foo Midori, and fukahire. All of the artists, male or female, take beautiful young girls as their subject matter, and there doesn’t seem to be any discernable difference between the themes and style of the male illustrators and those of the female illustrators. For example, this is a piece by the female artist onineko: 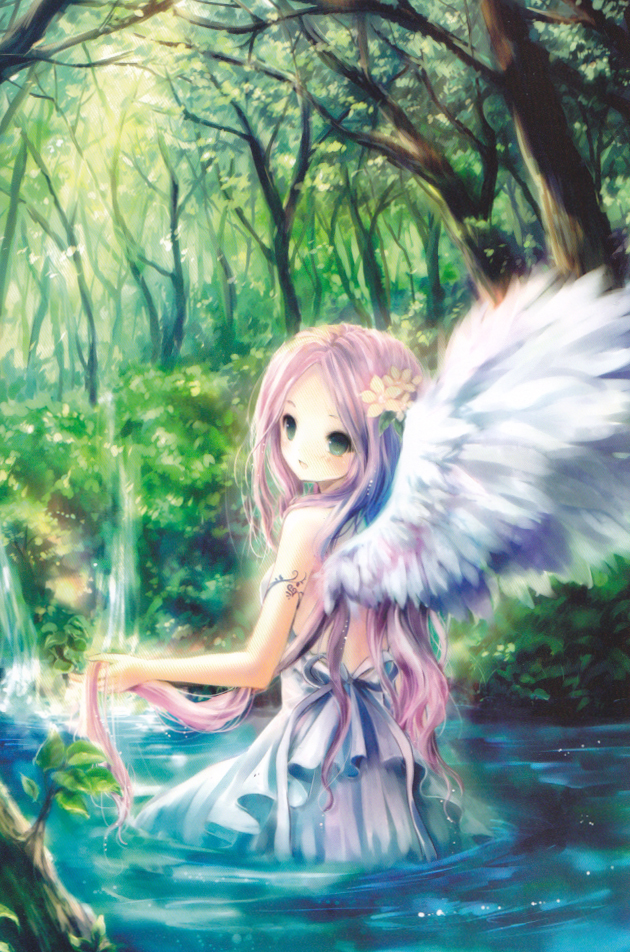 And here is a piece by the male artist Ichikawa Takashi: 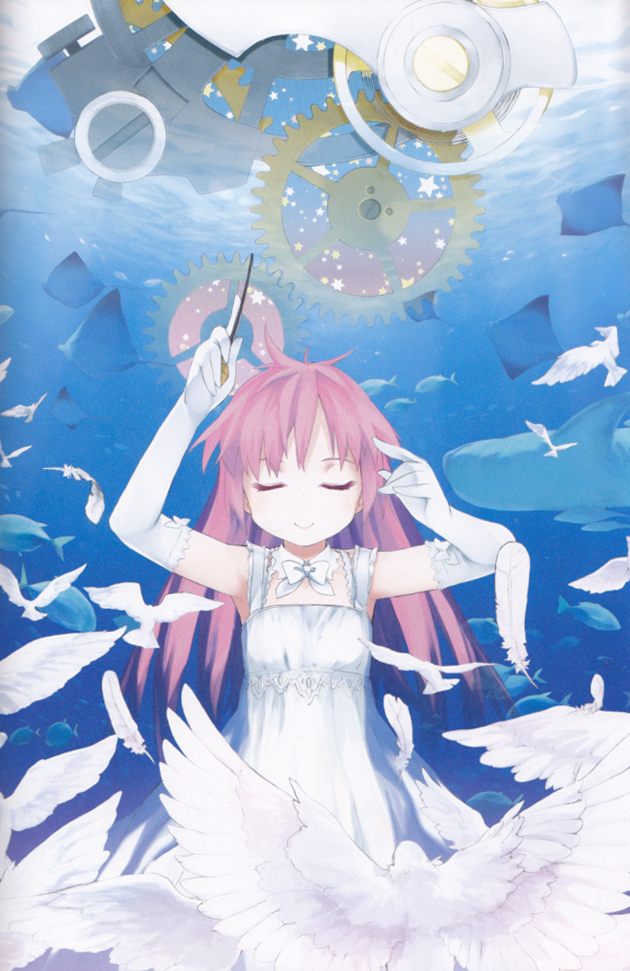 Both of these illustrated girls seem to be young, pure, and innocent. They are magical beings firmly enmeshed in their respective fantasy worlds, and there is a kind of “Alice in Wonderland” quality about them that probably seems familiar to a Western (and non-otaku Japanese) audience. Illustrations like these won’t raise any eyebrows.

Problems in the interpretation and judgment of these images arise when the girls are not quite so pure and innocent but instead betray hints of sexuality. For example, one picture by the male artist gorobots parodies the NHK (Japan Broadcasting Corporation) with the logo NPK (Japan Panty Corporation) and contains the text “When you sit down, I stand up,” double entendre absolutely intended:

Such sexualized images of young women are not just drawn by men, however. Exposed breasts, bums, and panties are also explored in the work of female artists like Higuchi Norie:

The portfolios of other female artists whose work appears in Girl, Illustrated are full of scantily-clad young women enjoying themselves and each other’s company. Regardless of the extent or intensity of the sexualization, however, the fantasy element of these pieces remains strong, and the girls are always more playful than pornographic.

As I mentioned earlier, I am not defending child pornography. Illustrated pornography in Japan is extraordinarily explicit, and it is quite clearly packaged as pornography and sold in separate venues, regardless of the imagined ages of its imaginary protagonists. As for sexualized but non-(overtly-)pornographic images of young girls, though, I might argue that they belong to a different discursive space altogether. Bishōjo simply are not real. They are not real because they are illustrated, obviously, but they are also not real because they are the embodied representatives of pure fantasy. Their world is not our world, and they are our gateways into that world. People who draw and appreciate them do so because of the beautiful otherworld they channel, not because they are fodder for onanistic inclinations. One might draw a parallel between the bishōjo style of illustration and the hyper-sexualized men and women on the covers of American fantasy novels; the tight leather pants and clinging silk dresses of these painted figures are not so much signifiers of pornography as they are emblems of a certain Tolkienian fantasy aesthetic.

The fundamental idea behind the proposed manga (and game and illustration) censorship law in Tokyo is that men are looking at women in a way that is psychologically unhealthy. There is obviously a pornographic gaze that is encouraged and exploited in many aspects of popular and commercial art, but I wonder if perhaps it wouldn’t be unreasonable to posit the existence of something like a “fantasy gaze,” or at least a type of gaze that is less concerned with the image itself than the story behind the image.

Moreover, the sizable percentage of women painting and consuming these bishōjo characters and illustrations complicates the idea of an all-powerful male gaze. One might argue, as have many feminist scholars, that these women have adopted an hermaphroditic gaze. In other words, female viewers have internalized the male gaze and therefore identify with male characters and viewers when they look at sexualized images of women. I myself would like to raise the possibility of a female gaze. This female gaze is responsible for the fanworks featuring male-on-male pairings from popular series like Naruto and Hetalia, of course, but I think it’s also a way for women to portray and look at themselves and other women. By creating and appreciating mildly sexualized images of girls, for example, women can embrace and celebrate a sexuality that lies beyond virgin/mother/whore stereotypes. For women, then, the appeal of bishōjo is not merely the asexual appeal of the fantasy world they represent but also the self-reflexive appeal of being young, beautiful, magical, and, yes, sexual. Furthermore, who is to say that male viewers don’t similarly employ this female gaze when looking at such images?

Girl, Illustrated isn’t just a collection of gorgeous artwork. It’s also a way of looking at and thinking about Japanese bishōjo illustrations. Included at the beginning of the volume is a (mostly) translated essay about how bishōjo characters are marketed and used to promote domestic regional tourism in Japan. Are the editors of the volume trying to suggest that perhaps bishōjo are Japan? It’s a stretch, but it’s also an interesting cultural perspective. In any case, this collection is both fascinating and beautifully produced. Even if you’re more interested in fine art than you are in anime, Girl, Illustrated is still an excellent resource for examining both portrayals of the body and the possibilities of new digital media.