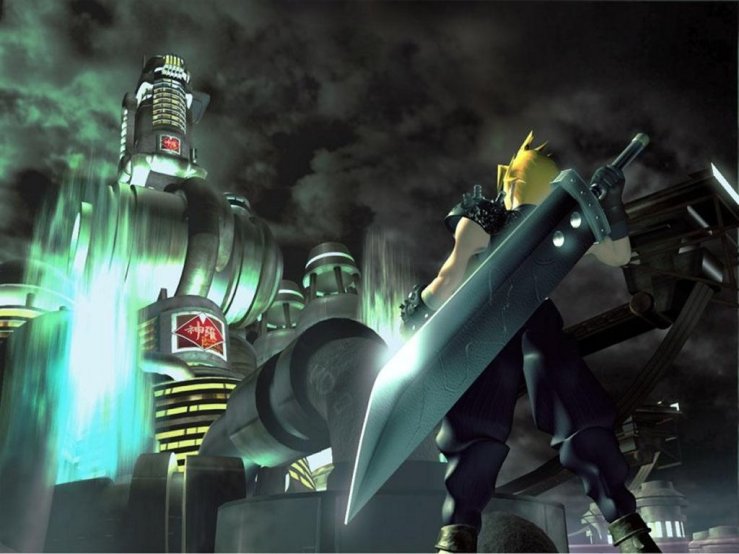 It can be argued that all of the characters in Final Fantasy VII are amalgamations of popular character tropes. One of the most important and popular characters from the game, Aeris, comes dangerously close to many of the various tropes identified with a Mary Sue. For example, the short paragraph of text in the game’s manual describes her as “mysteriously beautiful,” she has an exotic name, she has an usual and dramatic back story, she’s exceptionally talented in a wide variety of areas and possesses rare powers, she is the last of her race, all of game’s characters (even the markedly antisocial ones) adore her, she is brave, cheerful, and incorruptible, she is too pure for this earth and sacrifices herself to save everyone, and her only flaws, innocence and naivety, are far from damning. I am not trying to suggest that Aeris in fact is a Mary Sue character, or even that Mary Sue characters are necessarily a bad thing. What I am trying to suggest is that the character receives a very sympathetic portrayal and occasionally seems to good to be true.

No matter how close Aeris comes to a Mary Sue, she can never be a true Sue, as she is neither a writer nor a reader stand-in. That particular role belongs to Cloud, a confused and lonely young man who just happens to have a bigger sword than anyone else. It’s difficult not to sympathize with Cloud as he wins countless battles, runs up endless flights of stairs, snowboards, rides a huge motorcycle, cross-dresses, discovers his forgotten past, wins his revenge from the psychopath who torched his hometown, and is praised and admired by almost everyone in the game’s cast. At his core, though, Cloud is emotionally vulnerable and just needs someone to comfort and understand him.

That someone, for the first half of the game, is Aeris. Unless the player is armed with a cheat sheet of responses to in-game dialog, Final Fantasy VII sets Aeris up to be Cloud’s love interest. Aeris’s many attractive qualities serve to make her mid-game death more dramatically effective, of course, but they also serve to make her a more desirable partner for the player-protagonist. In this sense, then, she is what I might call a male-generated Mary Sue. She is not everything that the player wants to be, but everything that the player wants to be with. In other words, she is a perfect romantic partner, someone who is strong and kind and beautiful but still unconditionally attracted to the dorky male hero. Is the strength of such a female character truly empowering when it only serves to bolster the ego and libido of the player-protagonist?

Actually, quite a few female gamers have declared that yes, it is empowering. Over-rated though it may or may not be, Final Fantasy VII brought an extraordinary number of new players to the franchise with the richness and depth of its storytelling, world building, and gameplay. Many of these new players were female. As I mentioned earlier, although we can now say that it’s misleading to think of the majority of video game players as male, that stereotype wasn’t so far from the truth in 1997, the year that Final Fantasy VII was released during the early years of the Playstation gaming console. Female players were attracted to the game both by the burgeoning mainstream popularity of gaming and by the presence of female characters who were more than guns and boobs on a remote-controlled stick. Many female gamers in my generation grew up with Aeris and Tifa, and we saw these characters as much more than Cloud’s love interests – we saw them as real people, with real personalities. We also saw them as role models in a way that would have been difficult with the extremely limited dialog of earlier characters like Rydia.

Final Fantasy VII also passes the Bechdel Test in that Aeris is friends with Tifa, and the pair on multiple occasions talks about things other than Cloud. Tifa is herself an interesting character. Although her character design is all legs and chest, and although her fighting style seems tailor-made to show off her tight shirt and short shirt (witness her victory pose at the end of every successful battle), she has much more dialog than Aeris, and she is arguably a much darker character.

After the Shinra power company destroys her village and covers up the operation, she moves to the city of the company’s global headquarters, where she opens a bar that will serve as a base for a terrorist resistance movement. Throughout the game she is conscious of the human cost of terrorist activity, as well as the consequences of shutting down the world’s major source of electrical power. She must also navigate the guilt she feels at having bullied Cloud as a child, the confusion she feels regarding his amnesia surrounding their shared past, and the jealousy that she begins to feel toward Aeris. Yes, Tifa’s huge boobs are on constant display, and yes, the camera looks up her skirt when Cloud saves her from falling at the end of the game, but a new generation of female players were able to see past this and sympathize with Tifa as a complex character. Although there are countless fan works depicting the seduction and rape of both Tifa and Aeris, there are arguably many more that explore the aspirations and anxieties of the characters outside of sexual or romantic relationships.

Female players therefore brought with them a female gaze. This gaze not only transformed female characters from objects to subjects, but it also turned an objectifying lens on the male characters. These new female fans took advantage of the fledgling world wide web to form communities with other fans with whom they could discuss topics such as whether Cloud’s nemesis Sephiroth was even more attractive than Cloud. The international character of the internet also exposed Western fans to the work (and particularly the artwork) of Japanese fans, and soon Cloud was no longer in a romantic relationship with Aeris or Tifa but rather intimately involved with the evil military leader Sephiroth. For a generation of female fans too young for Star Trek, then, Final Fantasy VII was a gateway into alternative readings of popular texts. To give it due credit, the game has a story and cast of characters deep enough to actively encourage the female gaze that helped to make the game so popular. Although the vagaries of corporate marketing decisions are beyond me, I can only assume that Square quickly connected the unprecedented success of Final Fantasy VII to its popularity with gamers of both genders, since each successive game in the franchise has featured stronger and more developed female characters – as well as a colorful sprinkling of homoerotic tension between male characters.