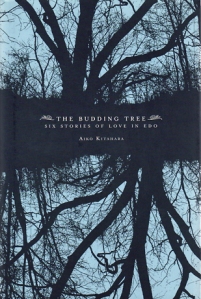 This past fall, I took a seminar on ukiyo-e, or Japanese woodblock prints depicting the “floating world” of the Edo period (1600-1868) urban pleasure districts. As we studied the courtesan prints of artists like Kitagawa Utamaro, we kept running up against the same issue: prostitution. Namely, what were the lives of the women painted by Utamaro really like? Were these women as glamorous as they seem in ukiyo-e, or were they sex slaves who lived miserable lives and died at an early age of starvation and disease? Or did they perhaps fall somewhere in between the two extremes, victims of their fates but still holding on to a measure of personal agency and control over their lives? As our class debated this issue, I couldn’t help but think about The Budding Tree.

Kitahara’s short story collection The Budding Tree is not about courtesans, but it is about Edo-period women who have close connections to the floating world. Each of the six stories in this collection has a different female protagonist: a Confucian tutor, a calligrapher who pens text that will be printed as gesaku popular novels, a singer of jōruri popular stage ballads, a hairpin designer who manages her own store, a rising print artist who works with Utagawa Kuniyoshi’s publisher, and the manager of an exclusive restaurant. Although the women don’t know each other directly, their stories are connected in small ways, and a unity of theme ties these stories together into a cohesive whole. Each of these women is struggling to make it in a man’s world, and each therefore leads a somewhat complicated love life.

I’m not an expert on the Edo period, so I’m not sure how realistic Kitahara’s depiction of her setting (Edo at the turn of the nineteenth century) actually is. From what I know of the lives of Hokusai’s daughters (especially Katsushika Ōi), however, her depiction of urban working women at the time isn’t too far off. As historical fiction, the stories in The Budding Tree are interesting and satisfying, especially since the swashbuckling samurai that one usually encounters in Japanese historical fiction are kept offstage. It is my (perhaps futile) hope that Ian MacDonald’s excellent translation will find a wide audience, so that other Japanese female-centric historical fiction, such as the Edo-period female detective stories of Miyabe Miyuki, will find their way into American bookstores.

I therefore recommend The Budding Tree to anyone with an interest in the Edo period, historical fiction, women’s literature, or just plain good romantic stories. The one caveat I might offer concerns the translation’s complete absence of footnotes. There are more than a few non-translated and non-glossed terms (such as jōruri, i.e., the songs of the puppet theater) that appear with frequency throughout the text, as well the names of actual historical figures and geographical landmarks with which a casual reader might not be familiar. Hopefully, however, the stories themselves will whet the reader’s appetite to learn more about the world of early nineteenth century Edo.