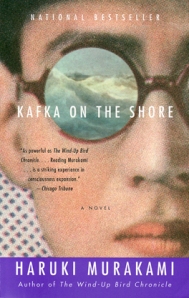 If you can get past all that, Kafka on the Shore is an utterly charming book. In 2005, when Gabriel’s bestselling translation of the book was released in America, Kafka on the Shore was given a place on the New York Times’s “Ten Best Books of the Year” list and received the World Fantasy Award. I can’t help but wonder how much of this attention was simply a manifestation of the guilt and embarrassment of the American publishing industry, which failed to recognize Murakami’s genius as displayed in such monumental novels as The Wind-Up Bird Chronicle (ねじまき鳥クロニクル, 1995); but, in any case, a lot of people found this book to be utterly charming.

The plot of the novel is long and convoluted, and I see no need to go into it. I would much rather talk about what exactly I found charming about the novel. What I enjoyed the most were the parallel plot lines. Every odd-numbered chapter focuses on the fifteen-year-old runaway Kafka, and every even-number chapter focuses on the sexagenarian Nakata, a likable man who has been rendered mentally deficient by a strange incident in his childhood. Although the two plot lines never meet in anything but the most indirect and metaphysical way, Murakami handles the structure just as skillfully as he did in his earlier novel Hard-Boiled Wonderland and the End of the World (世界の終りとハードボイルド・ワンダーランド, 1985), and I found the experience of following the two stories to be very enjoyable.

The overall atmosphere of the novel was also quite enjoyable. Over the course of his career, Murakami has become more skillful at depicting the small details of everyday life in contemporary Japan, and the attention to setting in Kafka on the Shore should dispel any lingering doubts as to Murakami’s status as a “literary” writer. Particularly enjoyable were the early Nakata chapters, in which the fuzzy-headed old man wanders around Tokyo’s Nakano Ward looking for a lost cat. Nakata apparently has the ability to talk to cats, so he is employed in his neighborhood as a finder of missing pets. Following the details of his life through his muddled but quaint way of looking at the world is, as I have said before, utterly charming. Kafka’s experiences at a small, private library in Takamatsu are rendered in loving detail and will probably send bibliophiles directly to the internet, where they will compare prices on plane tickets to Shikoku. As a side note, the Komura Library described in the novel actually exists and is apparently every bit as pleasant and charming as Murakami makes it out to be.

I hope that I have been able to convince you that this novel is “utterly charming.” Indeed, despite some bizarre cameo appearances by Colonel Sanders and Johnnie Walker, Kafka on the Shore is not as dark as many of Murakami’s other novels and actually manages to break out of the Murakami cycle of privileging the world inside one’s own head above living in the real world. Miss Saeki, the disappearing woman of Kafka on the Shore, is elegantly mysterious and achingly eloquent concerning love, life, childhood, and memory. Her final fate is one of the many mysteries the reader must solve on his or her own, as, like the other supernatural elements in the novel, Murakami never quite satisfactorily explains it. Thankfully, this is another one of the charming points of Kafka on the Shore. 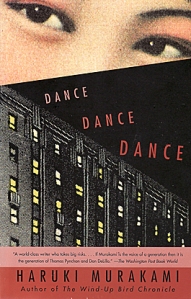 One of my favorite passages in Dance Dance Dance is the ending of one of the last chapters in the novel:

When I was little, I had this science book. There was a section on “What would happen to the world if there was no friction?” Answer: “Everything on earth would fly into space from the centrifugal force of revolution.” That was my mood.

Indeed, that is the mood of this entire novel, which is perhaps the strangest, most nihilistic, and most off-center Murakami novel I’ve read.

Dance Dance Dance is the sequel to Murakami’s popular 1982 novel A Wild Sheep Chase (羊をめぐる冒険). It concerns the unnamed narrator’s quest to return to the Dolphin Hotel and rescue his former girlfriend Kiki, who had disappeared at the end of A Wild Sheep Chase. Upon returning to Sapporo, the narrator finds that the old, run-down, mystery-haunted Dolphin Hotel of his memory has disappeared, and the Sheep Professor is nowhere to be found. A large, modern, high-class resort hotel, also called “The Dolphin Hotel,” has gone up in the same neighborhood, but the managers and staff claim to know nothing of the former hotel. One receptionist, however, responds the inquiries of narrator by telling him about a cold, pitch-black phantom floor at which the hotel’s elevator sometimes stops. In order to recover Kiki, and, in doing so, save the part of himself that had been damaged by the events in A Wild Sheep Chase, Murakami’s protagonist attempts to pursue these mysteries, albeit in a somewhat half-hearted way.

Of course, this being Murakami, there are many side stories that need to be explored along the way. The narrator catches a glimpse of Kiki acting in a bit part in a high-school romance movie alongside an actor named Gotanda, who had been an acquaintance of the narrator in high school. This connection leads our protagonist to a series of misadventures with his former classmate, who has been accused of killing a call girl rented out by a mysterious organization. Also, during his first stay at the new Dolphin Hotel, the narrator encounters and befriends a thirteen-year-old girl named Yuki, who has for all intents and purposes been abandoned by her famous artist mother and her famous novelist father, who have their own ties to shady organizations. Yuki is charmingly cynical, one of her best lines being, “I don’t give a damn what people say. They can be reptile food for all I care,” and she leads the narrator all over Tokyo, Yokohama, Enoshima, and Hawaii.

Do these plot points ever come together? Are the mysteries presented by the novel ever solved? If you’re familiar with Murakami’s fiction, you can probably guess the answer.

Even though this novel is dark and rambling and bears very little thematic resemblance to A Wild Sheep Chase, it should be an interesting and enjoyable read for Murakami fans. Although Dance Dance Dance is only a loose sequel to A Wild Sheep Chase, there are many things that don’t make sense without knowledge of the events of the previous novel. That being said, I also don’t think Dance Dance Dance should be read immediately after A Wild Sheep Chase, as it isn’t so much a sequel as an appropriation of characters and places for the purpose of creating an entirely different story. Alfred Birnbaum is, as always, a fantastic translator, and his rendition of Murakami’s prose makes this novel a fun, if somewhat gloomy, read.