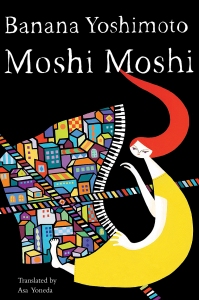 A year after her father dies in a suicide pact, twenty-something Mitsuharu Yoshie moves to the hipster neighborhood of Shimokitazawa, where she works part-time at a small bistro. Everything is going reasonably well for her until her mother suddenly decides to move in with her. Yoshie had been looking forward to leaving the nest and striking out on her own, but her mother claims that her father’s ghost has begun to haunt their old apartment, so what can she do?

Moshi Moshi is like a glossy lifestyle magazine in the form of a novel. Yoshie and her mother float through their days in Shimokitazawa, eating delicious food, buying nice things, and gradually getting to know their neighbors. Yoshie is serious about her work in the Les Liens bistro, and her mother is serious about pulling herself out of the mire of her former role as a housewife, but they have no money worries and are quite comfortable together.

The only shadow on their bright days is the death of Yoshie’s father Imoto, who played keyboard in a rock band. The official story is that he committed suicide with a much younger woman, but neither Yoshie nor her mother has any idea why an otherwise grounded and stable man would have consented to such an extreme act of desperation. One day, Yoshie randomly runs into a frequent diner at her bistro. The man’s name is Shintani, and he happens to own a club where Imoto’s band often played. Shintani takes this opportunity to tell Yoshie that there was something very strange about the woman her father ran off with. He also tells Yoshie that he’s falling in love with her.

Shintani is a typical Yoshimoto male love interest who could have walked straight out of the pages of a shōjo manga magazine. He is gentle, kind, and attractive in a nonthreatening way:

Shintani-kun still ate beautifully, and the pot-au-feu disappeared into his mouth with dreamy alacrity. As he ate, he looked out the window peacefully. He always wore nice shoes. (96)

Once they start seeing each other, Yoshie and Shintani bond in the same way that Yoshie and her mother do, namely, by visiting cool restaurants and bars and eating tasty and unusual dishes. It is their shared consumption of trendy food and chic clothes and music that brings them together, and Shimokitazawa is the perfect backdrop for this featherlight drama of consumerism. Yoshie’s mother is also healed by her immersion in hipster paradise:

When I saw her reading manga with her belly out, shedding tears while murmuring, “I understand, of course you want to go back and live in the cave,” I was filled up with the thought that this woman hadn’t done anything wrong, and didn’t deserve any of this.

Yes, Shimokitazawa was a little like a mountain cave in the outlands, where people who found it difficult to keep up with the vagaries of the world could live quietly, as they wanted. Even people who’d been left behind, like me and Mom. (88)

This laid-back atmosphere is occasionally juxtaposed against Yoshie and her mother’s former home in Meguro, a pricey neighborhood just south of Shibuya. Meguro is too upscale for the two women to be true to themselves, but they’re finally able to relax and find a comfortable community in Shimokitazawa, which welcomes sweet and slightly quirky people into its patchwork of quaint stores and cafés. The last sentence in the author’s Afterword aptly sums up the message of the book: “I only pray for the survival of all the many fine shops that still quietly continue to exist” (206).

Moshi Moshi has something vaguely resembling a plot, but the story isn’t really the point of the novel. Rather, the reader is bathed in the warm flow of Yoshimoto’s words while experiencing of the charm of the Shimokitazawa neighborhood. The novel is comforting, like drinking hot chocolate on a cold day. Just don’t expect any bold or complicated flavors, and you won’t be disappointed.