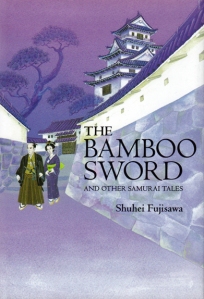 The single sentence of text on the back side of this book’s dust jacket reads: “Evocative, exciting, and tender, these charming tales open a window onto life in Japan as it was four hundred years ago.” Although I am generally wary of the unironic use of the word “charming,” I have to agree that it’s the word that best describes The Bamboo Sword. These stories are charming. They’re light-hearted and don’t take themselves too seriously. Men are masculine, women are feminine, ideals like honor and virtue hold true, and the good guys always win in the end.

If I had to guess, I might say that the target audience for these stories are oyaji, older middle-aged men who are generally considered to just about the least cool people in Japan (unless they happen to be Kitano Takeshi). Oyaji are the workhorses of the Japanese economy but never get enough respect. They enjoy the simple pleasures of life, such as drinking and enka, and all they need is a little love to help them maintain their daily struggles for the sake of their families and their country. They can come off as grumpy sons of bitches, but really they’re all good people deep inside. I say that oyaji are the target audience for The Bamboo Sword because the protagonist of each of the book’s eight stories is an Edo-period oyaji. These (mostly) samurai protagonists are down on their luck, especially since there’s not much fighting to be done in the Edo period, but they shine when given a chance to prove themselves.

The stories in The Bamboo Sword tend to alternate between domestic pieces and action pieces. A good example of one of the domestic stories is “Out of Luck,” in which an out-of-work rake named Sanjiro seduces a girl and then dumps her. The girl’s dad tracks down Sanjiro, hauls him out of the bar he frequents with his friends, and forces him to come home and marry his daughter. The father is a rice merchant, and employs Sanjiro as his apprentice. Sanjiro hates the strict training, but his new father-in-law cheerfully chases him down every time he tries to escape. In the end, Sanjiro falls in love with his wife, takes over the family business, and wonders how he could have ever enjoyed the pathetic lifestyle he used to live before his father-in-law beat some sense into him.

My favorite action story is called “The Runaway Stallion,” which is about a samurai named Tsubuki Jubei who inadvertently becomes involved in a political plot. Jubei’s old rival, who has since become a Vice Councilor, volunteers Jubei as a bodyguard for a courier delivering extremely sensitive information. Jubei and the courier are ambushed, and Jubei, who had become more interested in drinking and grumping around than training as he got older, is almost killed. Jubei realizes that he really needs to get his act together and goes back to his old fencing teacher, begging him to whip him into shape. Thus begins a training montage, over the course of which Jubei stops a runaway horse with his bare hands and learns more about the political plot that almost got him killed. It turns out that the Vice Councilor is not such a good person and wants Jubei dead for his own petty reasons. By the end of the story, though, Jubei defeats his enemy and proves himself to be a badass. The woman who is living with him as a maid singlehandedly stops an assassin and is also a badass. If there were a dog in the story, you can bet that the dog would secretly be a badass too. It’s just that kind of story.

The Bamboo Sword is very light reading. Its stories are indeed “charming.” There is some tension between classes, some tension between political ideologies and social realities, and some classic samurai-style tension between giri and ninjō, but the main conflict in the book is between the protagonists’ alcoholic tendencies and their desire to be awesome. It’s not difficult to read these characters as the fictional embodiments of wish-fulfilling fantasies on the part of an older generation of salaryman corporate warriors. In short, The Bamboo Sword is like chick lit for old dudes. Even if its system of values is a bit stodgy, it’s still a lot of fun.