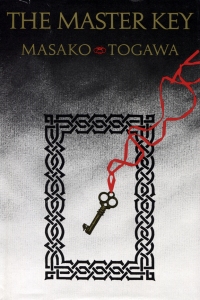 The Master Key, first published in 1962 and set in the late 1950s, is an interesting window into a period of postwar Japan that we don’t often see represented in Japanese fiction in translation. The story takes place entirely within the closed world of the K Apartments for Ladies, a large, multi-story building located in southeast Ikebukuro and registered as a charitable trust with “rents pegged at wartime levels.”

On its surface, the story is about a 1951 kidnapping of a young boy who is the son of a Japanese woman and an American military officer. Seven years later, when the K Apartments building is lifted and moved to a different location in a grand public works experiment, the body of a child is discovered buried underneath a shared bathing area in the basement. Right around the time the child disappeared, a man dressed as a woman was struck by a van in an intersection near the apartment building, and it’s revealed to the reader early in the novel that this man disguised himself as a woman to help one of the tenants dispose of the body that would later be found in the building’s basement. Who in the apartment buried the body, and what relation does this have to the kidnapping incident?

About twenty pages into The Master Key, however, it becomes clear that the mystery portion of the story is going to take a backseat to an extended exploration of the inner worlds contained within the K Apartments for Ladies and the psychological dysfunctions of its aging tenants.

Ishiyama Noriko, who has been diagnosed with “nervous pains,” has removed herself from the rest of the world and lives in a dark apartment stuffed with other people’s trash, which she occasionally boils and eats to sustain herself. Yatabe Suwa, a former concert violinist who now gives music lessons to children, is haunted by the loss of potential represented by the theft of a violin from her own teacher, even though it’s possible that she herself may have more to do with this incident than she likes to admit. Kimura Yoneko retired from her position as a schoolteacher years ago and spends her days writing letters to her former students, and she is not above checking into the affairs of the other tenants as well. Santo Haru is obsessed with a religious cult, and she is in the palm of its leader, who frequents her apartment to hold prayer meetings centered around the trances of its vestal priestess.

The plot is complicated and circuitous but is centered around the use and whereabouts of the master key of the title, which various tenants use to sneak into one another’s rooms in order to discover the secrets of others while concealing their own. At the end of the novel, it’s revealed that there is a mastermind orchestrating all of their movements, someone who has been spying on everyone for years and has manipulated the women around her for her own amusement. As someone who had essentially done the same thing to these characters through the process of reading this novel, I felt somewhat guilty, but not enough to lessen my enjoyment of how neatly all of the different plot threads are eventually tied together.

I will openly admit that I love stories about women being unpleasant and irrational and absolutely human. All of the female characters in this story are a little pathetic and a little demonic in that they have no power outside the K Apartments but all manner of strange little powers within their closed world. I’m sure this can be read as a metaphor for something, but it need not be, as the haunted and uncanny environment the characters shape through their bizarre actions is absolutely fascinating in and of itself.

For people with more background on Japanese history and urban space, the story’s setting in Ikebukuro is of special interest. In the immediate postwar period, Ikebukuro famously functioned as a heterotopia in which diverse groups of people came together and the norms of mainstream society didn’t necessarily apply. There is all manner of hidden “national polity” history in Ikebukuro, where the family-state of Japan has buried countless failed narratives under highways and skyscrapers. The Master Key thus serves as an excellent example of postwar Tokyo gothic (as similarly exemplified by Kyōgoku Natsuhiko’s The Summer of the Ubume). A reader doesn’t need historical knowledge to appreciate the story, but a bit of research into the setting has the potential to deepen the experience of reading this novel, which has sub-basements under sub-basements under sub-basements.

The Master Key is long out of print but still cheaply available through a number of online used book services. If you have access to your local or university library’s Interlibrary Loan program, it’s well worth requesting this book. It’s a quick read, and it packs a huge impact. To my fellow horror and mystery lovers especially, I highly recommend tracking down a copy of this short, satisfying, and creepy little novel.