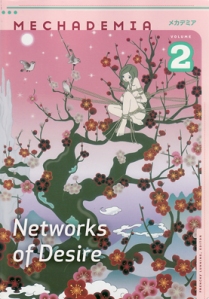 The annual publication Mechademia is, as far as I can tell, the best source for scholarship on contemporary Japanese popular culture in English, even surpassing recent essay collections like Cinema Anime (2008, edited by Stephen T. Brown) and The Worlds of Japanese Popular Culture (2008, edited by Dolores Martinez), which are both fabulous. Each of the three volumes of Mechademia contains about fifteen 15-20 page articles on a specific topic, theme, or work. Although a wide range of authors, from academics to grad students to freelance writers, is represented, the editing is tight, and the essays are of uniformly high quality. These articles are well-illustrated with grayscale images, and the overall layout and design of each journal is visually attractive. Of course, the vibrant cover illustrations, taken from works by artists like Aoshima Chiho and Oksana Badrak, are quite eye-catching as well.

The subject matter of the various articles in Mechademia deals with broad cultural phenomena, such as fanfiction and the Gothic and Lolita subculture, important themes in Japanese pop culture, like shōjo and homoeroticism, and examinations of various anime, animated films, manga, and video games. Auteurs such as Miyazaki Hayao and Shinkai Makoto and famous manga-ka like Tezuka Osamu and Mizuki Shigeru are well-represented, as are controversial and provocative anime like Revolutionary Girl Utena and Neon Genesis Evangelion and canonical films such as Ghost in the Shell 2: Innocence and Blood: The Last Vampire. Lesser known but still noteworthy works of Japanese animation, like Haibane Renmai, have also been included in the selection of articles.

The tone of the journal is predominantly scholarly, and the authors and editors assume that the reader is at least somewhat familiar with Japanese popular culture. In other words, Mechademia takes the value of its subject matter for granted; there are no essentializing explanations of what Japanese popular culture is and what makes it so great. The journal is not directed at “specialists,” however, as most of the articles are quite approachable by scholars who don’t know much about anime and anime fans who don’t know much about post-structuralist theory. There is very little geeking out going on on either the academic side or the otaku side, a facet of the editing which makes each volume of the journal quite readable while preserving an atmosphere of intellectual rigor.

An interesting feature is the “Review and Commentary” section at the end of each volume. This section presents several shorter articles that, as the section title suggests, take the form of reviews and commentary, often in the guise of semi-philosophical musings. Two of my favorite mini essays in this section are a piece by Trina Robbins, a former editor and localizer for the “Shojo Beat” line of manga from Viz Media, on the inner workings of an American manga publisher, and a very short introduction to the psychology of dolls in contemporary Japan by Susan Napier, the mother of “Anime Studies” in America. This “Review and Commentary” section reads like a high octane version of a monthly anime magazine and provides plenty of food for thought in bite-sized chunks.

Since Mechademia is so readable, and also since it’s such an attractive publication, I would recommend it to any serious fan of contemporary Japanese popular culture. Although the first volume was somewhat shaky on its feet, the two subsequent volumes have improved dramatically, and the new volume, “War/Time,” comes out on October 30.