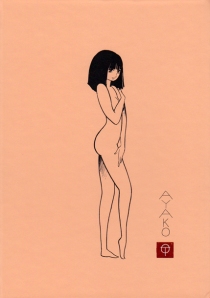 Every once in awhile I will play a game with myself in which I try to imagine the perfect setup for a Gothic novel. Family secrets! Incest! Murder! A madwoman locked in the basement! Sex! Revenge! I was thrilled, then, when I found that Tezuka Osamu’s mid-career manga Ayako hits all of the Gothic genre high points, one after the other. In 1949, a man named Jirō returns to Japan from an American POW camp to find his homeland significantly changed. The political situation in Tokyo is bad, but Jirō’s family situation in rural Japan is even worse, as the powerful Tenge clan has lost most of its holdings in the postwar land ownership restructuring movements. Through a convoluted series of events, Jirō ends up committing murder and has to flee the countryside. Through an equally convoluted series of events, Jirō’s four-year-old sister Ayako, who is made to bear the blame for the family’s misfortunes, is locked in a cellar for more than twenty years before finally being rescued by her older brother Shirō, who has been biding his time while witnessing the slow decay of his family. Ayako escapes her family and flees to Tokyo, where she is reunited with Jirō, whose rise to power reflects Japan’s economic ascent in the sixties. The Gothic elements of Ayako’s family drama are enhanced by the Gothic elements of postwar Japanese history, with its unsavory secrets and shady backroom deals and assassinated activists all swept under the historical carpet.

The whole thing weighs in at exactly seven hundred pages, making it a book to be reckoned with. It is in fact a Book, beautiful and well-published (but probably too big to carry around casually; an e-reader edition would have been awesome, but alas). Perhaps because of the way it has been published, in a tasteful, hardcover, single-volume edition, its ad copy attempts to market it as a Novel, stating, “Ayako looms as a pinnacle of Naturalist literature in Japan with few peers even in prose, the striking heroine a potent emblem of things left unseen by the war.” I read the publicity for the graphic novel, got excited, and had Amazon ship it to me on the day it came out. If people were comparing Ayako to Faulkner and Tolstoy, why shouldn’t I read it immediately? Unfortunately, although Ayako is certainly a major accomplishment in the field of graphic novels, I am going to have to put my foot down and declare that it is not in fact on par with the best of Japanese prose. Far from it. As literature, Ayako is riddled with problems.

Let’s start with the storytelling. The plot is highly improbable from beginning to end, and its developments often don’t make much sense if the reader begins to question them. The ending, which reeks of poetic justice, feels especially heavy handed. If one simply accepts the story as it unfolds, it’s not so far-fetched that it’s ridiculous, but “a pinnacle of Naturalist literature” it is not. The pacing is also highly uneven. I am not referring to the beautiful drawings of city- and country-scapes that Tezuka often inserts under blocks of third-person, scene-setting narration, but rather to certain key plot points that happen way too quickly. This refusal to let the reader slow down and figure out what’s happening is especially bad at the beginning and end of the book. Perhaps this why the plot at these points feels so contrived, or perhaps Tezuka himself wishes to rush across his plot holes. In any case, I didn’t feel that I was in the hands of a professional at the top of his game.

Another thing I expect from the “literary” novels I read is a cast of deep, multi-faceted characters, but the dramatis personae of Ayako are all one-dimensional. The Tenge patriarch and his oldest son Ichirō, for example, do what they do simply because they’re evil people. The two most complex characters, Jirō and Shirō, merely flip between “good” and “bad” like cutout paper puppets. Perhaps the female characters possess a greater depth of personality, but the narrative doesn’t really seem to care about them. Of Ichirō’s second wife, Tezuka says only that she is “so bland and devoid of a role in this tale that she is not worth mentioning.” Why is this woman driven to marry a man who obviously murdered his first wife, and how does she deal with his moodiness, alcoholism, and deranged family? It’s not worth mentioning, I guess. Ayako, who has the potential to be the most interesting character, is the most disappointing. The image of her on the cover of the book says everything you need to know about her. She is young, beautiful, and mysterious, and she very much wants to have sex with you. We see her breasts, butt, thighs, and panties more than we hear her speak. (I am exaggerating, but only a bit.) Of course she is seriously psychologically damaged, but Tezuka doesn’t give this the narrative weight it deserves, choosing instead to have us view her through the eyes of his male characters, who regard her as both pitiful and sexually irresistible. A “striking heroine” and a “potent emblem,” indeed.

Other minor characters are so cartoonish and caricatured that they don’t add much of anything to the story. In fact, one might say they detract from it. Clones of Popeye, Olive Oil, and Dick Tracy don’t really help the story construct itself as “serious literature,” and Tezuka’s brief attempts at humor feel inane and misplaced. On that note, the art quality in Ayako can sometimes be shockingly bad. For example, I don’t think Tezuka was even trying in this panel:

There are many examples that are far worse, but it would be cruel to beat such an ugly dead horse. Furthermore, some scenes that should be highly dramatic, like Jirō murdering one of his subordinates, come off as silly because the artwork is so immature. The cartoon character designs and the rushed artwork are much better, however, than Tezuka’s occasional attempts at realism. Such drawings are, quite honestly, unlovely, and their effect on the flow of the story is akin to someone jumping onto the train tracks. I’m sure that someone at some point will write a paper on Tezuka’s changes in artistic style in Ayako, but I came away with the feeling that his excursions into realism were randomly placed and artistically useless. They strike the reader forcefully – not in the way that an amazing photograph on the cover of a news magazine does, but rather in the way that someone suddenly vomiting in a crowded train does.

Such an awkward analogy brings me to my final point of contention: the translation. Again, the ad copy bills Mari Morimoto as an veteran translator, but I’m afraid that her extensive resume gave her a sense of artistic entitlement that she then used to absolutely no one’s advantage. If you think that this is a mean, nasty thing to say, I encourage you to read a page of Ayako (click on the image for a larger version):

I believe that dialect is something that is much more natural and naturalized in written Japanese than it is in written English. In written English, one needs merely to say of a character that he has a French accent; there is no need to write his every line of dialog as something like, “Je would like zee wat-ere with mon caf-ey.” The translation of Ōoku, which employs a vaguely Shakespearean idiom to give a sense of all the de gozaru period speech patterns going on in the original Japanese, succeeds brilliantly because the touch of dialect is so light. It is suggested to the reader, not shoved into his face and down his throat. The translation of Ayako, however, not only draws unnecessary attention to itself but also robs the Tenge family of any power, dignity, tragedy, or pathos they might have possibly had by making them sound like a Family Guy parody of the Beverly Hillbillies. There are also strange aberrations in the speech of certain characters, like when Jirō suddenly and without warning starts calling people “Guv’nor” in the last quarter of the book. And then there are the occasional lines of dialog that make no sense, such as when a character who otherwise uses unmarked speech says something like, “Boss! Our lads will think you’ve prostrated yourself to the [rival gangster organization]! They’ll be all a-seethe!” They’ll be all a-seethe? Seriously?

Any of these problem areas – narrative structure, pacing, characterization, art, translation – would potentially be a deal-breaker by itself, but together they make Ayako awkward and almost unreadable at times. Ayako is a deeply flawed work, and its flaws are of the type that are simply annoying without adding any depth to the story. I am posting an abbreviated version of this review on Amazon, and I am giving Ayako four out of five stars, because, despite everything, it is an excellent graphic novel. If you come to it expecting a literary masterpiece on par with The Makioka Sisters or The Sound and the Fury, however, you’re going to be sorely disappointed. Ayako is not high literature. It is a comic book: an engaging and thought-provoking comic book that was ahead of its time, but a comic book nonetheless.

I wholeheartedly recommend Ayako to librarians building a manga collection as well as to people who study manga, and I somewhat reservedly recommend it to people who are either Tezuka fans or otherwise used to reading manga published before the nineties. However, Ayako is not for literary types seeking an introduction to manga, and it is not for casual manga fans seeking an introduction to Tezuka. Unless you’re really sure that you want to read Ayako, warts and all, you’re better off trying a Tezuka title like Buddha or Phoenix. Better yet, skip the history lesson and go straight to Urasawa Naoki, who achieves the beauty of art and novelistic scope and density of character that perhaps Tezuka could have aimed for had he not been working on a dozen projects all at once.

In conclusion, I’m happy that Vertical has released Ayako in translation, but I find the ad copy misleading and counter-productive. It’s like talking about some entertaining yet vacuous commercial garbage like the Percy Jackson and the Olympians series and saying, “Look! This is literature! It references mythology!” in an attempt to get people to take young adult fiction seriously. There are plenty of literary manga out there, but Ayako feels like a relatively minor work in the canon, no matter how much money its publisher put into its release. If Vertical insists on producing deluxe editions, I wish they would pick up classics like Rose of Versailles or The Heart of Thomas, which have aged remarkably well. Otherwise, it is my hope that, in their ongoing battle against scanlations, they publish more affordable editions (like digital ones!) that might appeal to poor students such as myself, who sometimes get upset when their shiny new $30 investment isn’t everything it was promised to be.