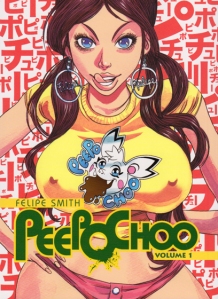 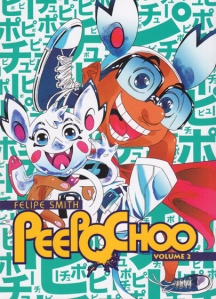 Peepo Choo was my Christmas present to myself. I had read a number of reviews which stated that, in short, the title is too offensive to exist and will only appeal to the most hardcore of manga fans. I have had my fill of critically favored yet bland and innocuous series like Kiichi and the Magic Books and Natsume’s Book of Friends, so such a negative assessment of Peepo Choo was as good of a recommendation as any.

I’m happy that I gave the series a chance. I read all three books without even noticing the passage of time, and then I went back a few days later and read them all again. Peepo Choo is brilliant. And yes, it is offensive. If you are shocked and appalled by the image of a group of bullies feeding a bloody tampon to a crying girl on the floor of a public restroom, or by the image of a decapitated fat man anally impaled on the gargantuan penis of his murderer, then Peepo Choo is not for you. And that’s okay. However, if you are one of those vile degenerates who has grown weary of shōjo manga and has come to consider a cute cartoon character regurgitating feces (or a stalker jacking off while witnessing a street fight) to be all in good fun, then you are more than capable of appreciating the genius of one of the most creative and entertaining manga released in America during the past year.

Peepo Choo tells the story of Milton, a teenage anime dork from the South Side of Chicago. Milton doesn’t fit in with the gangsta culture of his hometown and dreams about visiting Japan, where everyone loves anime and cosplays all the time and lives the hyper kawaii lifestyle advocated by his favorite animated series, Peepo Choo. Milton habitually skips school to visit a comic book store run by a silent, hulking gorilla of a man named Gill who uses the business as a cover for his true profession, mass murder for hire. The cashier at the store is Jody, a young (and secretly virginal) porn addict who energetically hates comic book geeks and otaku alike. When Milton wins a free trip to Japan through a lottery sponsored by the store, he sets off with Jody and Gill for Tokyo.

Jody wants pussy (to put it bluntly) and is counting on Milton, who has been assiduously studying Japanese by watching Peepo Choo, to interpret for him. Gill has been hired to take down an ultraviolent yakuza who calls himself Rockstar and sets about doing this by first massacring everyone else who tries to kill the self-styled gangsta Japanese homeboy. While Gill is taking care of business, Jody and Milton come to the unpleasant realization that the “Japanese” Milton has learned from Peepo Choo (“Howdy, sir milk dog! Feet be berry!”) isn’t real Japanese, and that the series was never even popular in Japan. When all hope seems lost, Milton stumbles across a dorky, pug-faced girl named Miki, who recognizes Milton’s Peepo Dance and tries to communicate with him with the bilingual aid of her friend Reiko, the lovely lady who graces the cover of the first volume of the manga. Milton, Miki, and Reiko go to Akihabara while Jody becomes involved in the yakuza war that Gill has created. In both cases, chaos ensues.

One of the most common complaints about Peepo Choo is that the artwork is bad. Some reviewers qualify their opinion by stating that at least the artwork is deliberately bad. Personally, I think Felipe Smith’s artwork is the strongest aspect of the manga. The art isn’t bad; it’s stylized. There is a difference. Smith exaggerates the faces and reactions of his characters to humorous effect, of course, but he also does it to convey emotion. Characters don’t have to tell you how they’re feeling; they show you. As a result, each image contains a wealth of characterization without having to resort to pointless dialog. Smith’s graphic portrayals of his characters are constantly innovative and always spot-on. This is one of my favorites: 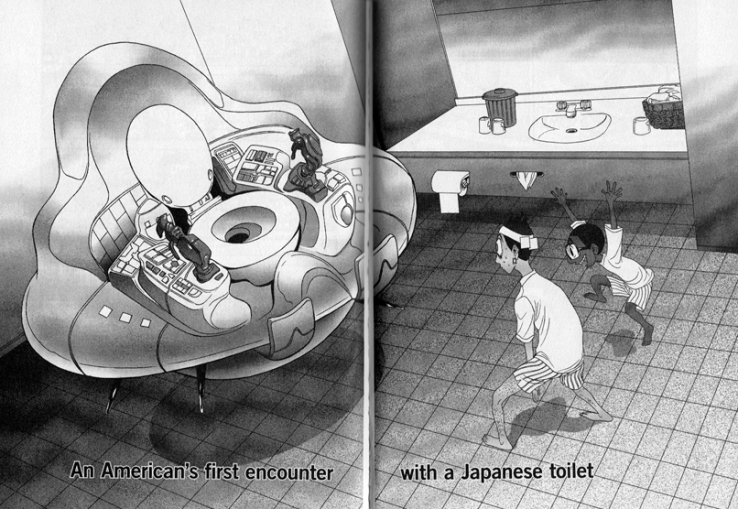 An image like this tells the reader everything he or she needs to know about Milton and Jody’s first impressions of Japan without any verbal narration ever having to spell them out. Milton is delighted with the country’s quirkiness, while Jody is confounded and a bit frightened. This sort of graphic style also ensures that the reader never takes the story too seriously, which helps to mitigate its bursts of extreme violence and sexuality.

Speaking of the story, another complaint I have read about the series is that it doesn’t live up to its potential as a narrative. Unlike more conventional manga, not every loose end in Peepo Choo is tied up. The characters do not couple off. The bad guys are not defeated, and no clear-cut good guys ever emerge. Cultural differences are explored, but no one ever really comes to a complete understanding of anyone else. Characters are developed, but not to neat, logical conclusions. At the end of the series, Milton is still a dork, Jody is still a bitter virgin, Miki is still ugly, Rockstar is still an obnoxious gangsta wannabe, and Gill is still an inscrutable violence junkie. (Reiko has a bit of an epiphany, the nature of which feels a bit chiché, but Reiko is awesome, so I will ignore any stereotypes that might apply to her.) Along the way, however, every single character is uniquely appealing. Even the unsympathetic characters (namely Jody and Rockstar) are fun to watch and fun to hate. As a character, Gill especially is a force unto himself and makes the whole series worthwhile, even if the “examination of cultural assumptions and differences” theme occasionally seems a bit too wholesome and contrived.

In my opinion, Peepo Choo is one of the best new manga of 2010. I understand that scenes of frenzied masturbation and disemboweled yakuza aren’t for everyone, though, even if they are accompanied by infinitely creative artwork and thematically multilayered storytelling. I will therefore confess that my other great discovery of the past year was the perennially amazing Igarashi Daisuke’s Children of the Sea, which is also brilliant and beautiful and eerie and disturbing (but on the polar opposite end of the raunchy scale). Along with Peepo Choo, I recommend Children of the Sea to anyone with an interest in Japanese literature who appreciates graphic art and isn’t afraid to be intellectually and emotionally challenged.

Here’s to a fantastic year of Japanese literature and manga in translation! Cheers! 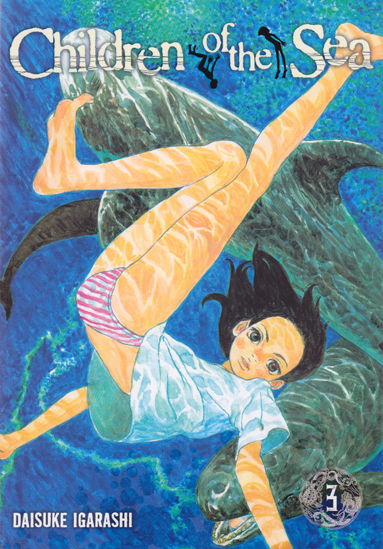